CHILD FRIENDLINESS AS A DRIVER FOR URBAN RESILIENCE

WHAT IS A RESILIENT CITY?

In a nutshell, a Resilient City is an open, just and the adaptable city prepared to respond to challenges that might occur while being capable to always enable its citizens to thrive. A resilient city demonstrates inclusive decision-making processes, integrated systems and resourceful plans.

RESILIENT THESSALONIKI – A STRATEGY FOR 2030

In 2014, Thessaloniki joined the 100 Resilient Cities Network pioneered by the Rockefeller Foundation. The Municipality used this opportunity to create a long term forward-looking strategy that addresses the current and future challenges through a new participatory and robust approach.

The participatory aspect has been of great prominence during both the strategy development and the implementation phase when different citizen groups were approached through various activities in order to be heard and involved. Thessaloniki acknowledges that currently children are an age group largely overlooked in the decision making and planning processes, and thus decided to distinctively integrate the Children’s Rights in the city’s strategy. By elevating the position of the child in the city’s agenda, Thessaloniki urges for an institutional shift through primarily raising awareness on the importance of the issue and ensuring acceptance of the child as an equal citizen.

In line with various indicators that define a Child-Friendly City, Thessaloniki designed a range of Action Plans aiming to embed the Children’s Rights into the decision-making processes and urban planning approaches. Setting the public space as the starting point of this attempt, the city explored new approaches in programming, policy-making and infrastructure design.

Open Schools Program – Software
Thessaloniki lacks high quality open public spaces due to the densely built urban fabric. On a neighbourhood scale, the number of parks and playgrounds does not correspond to the number of its residents. Parents have been raising this issue linking it to the increasing trend of families moving to adjacent municipalities and thus contributing to the city’s chronic stress of an ageing population.

The goal of the Open Schools Program is two-fold. On the one hand, it enables access to the schoolyards during after-school hours, offering additional open space for play and socialising. On the other hand, it enriches the school’s schedule with extracurricular activities that range from environmental education to active citizenship, promoting a model of non-formal and community-based education. The activities are coordinated mainly by citizen initiatives and the expectation is the transformation of underutilised schoolyards into community hubs where the child becomes the protagonist of the neighbourhood’s social life.

By investing in the schools’ programs the municipality aims to increase the number of families that live in the city and eventually regenerate the vibrant public realm in residential neighbourhoods.

Co-creation of Public Spaces Policy – Orgware
Thessaloniki developed a public space co-creation policy aiming to enrich the city’s public spaces and improve social cohesion through the co-production and delivery of programming in the city’s public spaces. The policy emphasises the importance of reclaiming the neighbourhood’s public space and promotes the concept of placemaking by encouraging citizens to take action, participate and reinforce the authentic identity of the place. Children as the regular users of parks and playgrounds have the opportunity to contribute together with their families and friends to the transformation of their neighbourhood. Through placemaking, the municipality aims to strengthen the sense of place to children residents, as well as introduce principles of active citizenship such as the understanding of ownership and responsibility.

Thessaloniki Safe Routes to School Scheme (TSRTS) – Hardware
Taking into consideration the poor design and maintenance of street infrastructure as well as the traffic congestion, the municipality plans to develop a comprehensive TSRTS scheme in order to improve street safety and enable more children to walk and cycle to school.

The scheme will include a set of specific physical measures and policies for improving the street conditions while also mitigating environmental and societal challenges, such as air pollution and child obesity. Additionally, a toolkit is also designed with a set of activities for public awareness on traffic safety and school community participation. 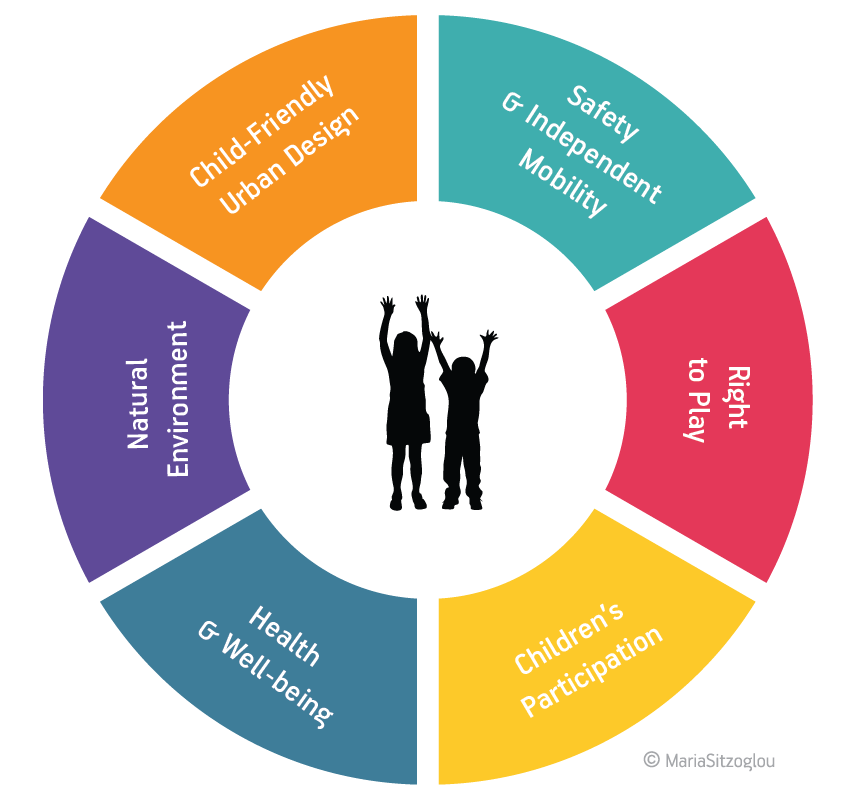 Various key indicators of a Child Friendly City that apply in the context of Thessaloniki, based on the UNICEF CRCI Toolkit4

An integral component of the TSRTS scheme is the participatory mapping activity with the school community. During the first pilot activity in a K-12 school complex, the participants were asked to map the routes they follow every day on their way to and from school, their transportation mode and the locations they perceive as the most dangerous and most pleasant within the neighbourhood. The maps generated in those workshops distinctly showed the high-risk locations regarding traffic safety or natural hazards (e.g. flooding spots) but also the places of attractive spatial quality.

The reliability of these results was initially questioned by engineers as the information marked on the maps was illustrated with stars and happy faces. This “communication gap” was bridged by converting the harvested information into GIS maps and thus translating the children’s perceptions into the engineer’s professional language. The TSRTS Scheme aims to equip each school in the Municipality with
a map of the recommended routes according to the preferred mode of transportation. 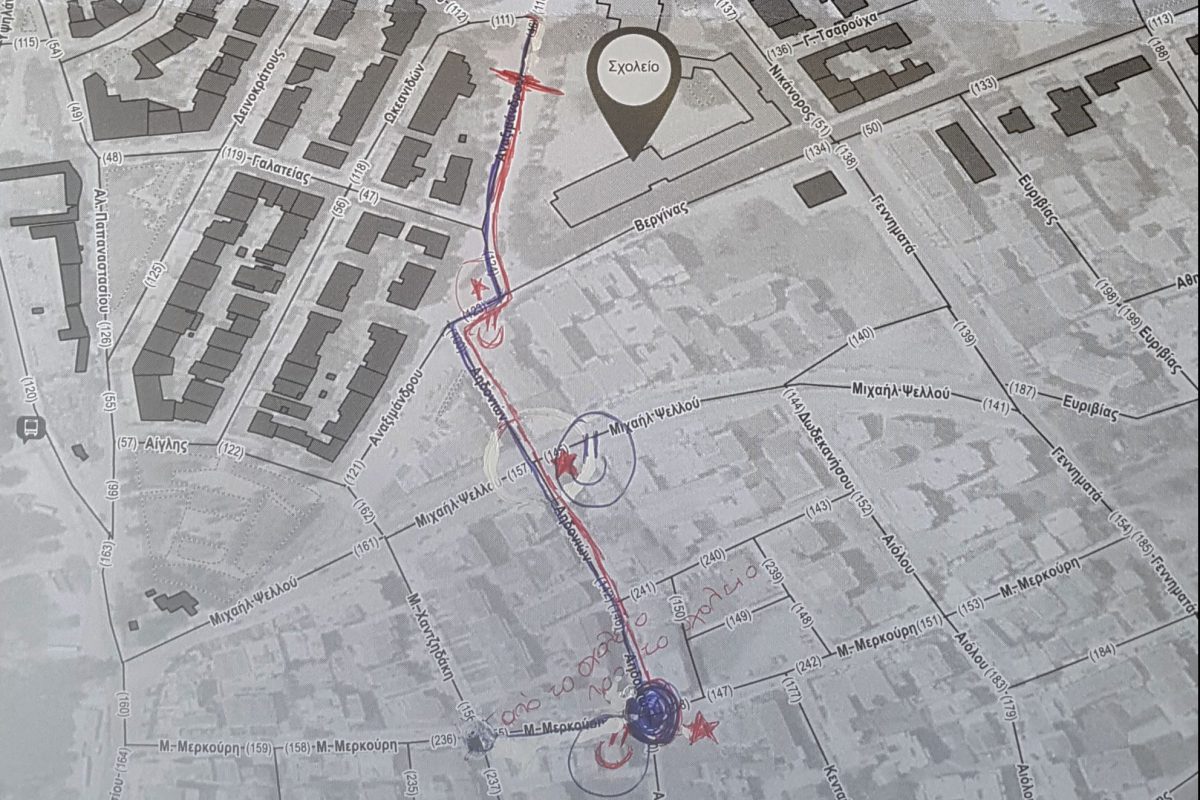 One of the Safe Routes to School maps.

In conclusion, child-friendliness can be a driver for urban resilience as it is a cross-cutting theme. Child-Friendly Cities celebrate civic participation, call for community’s social cohesion and multi-stakeholder engagement. Thinking through the child’s perspective provides resourceful solutions that tackle other seemingly unrelated challenges and deliver integrated policies and systems.

The lessons learned from Thessaloniki include the importance of:
– Gaining the “political will” to ensure awareness and secure funding
– Achieving cross-sector engagement and multi-stakeholder partnerships
– Designing communication tools to translate the children’s ideas into “adult language”
– Discovering where mutual interests between different stakeholders lie
– Recognising the time needed for institutional and cultural shifts 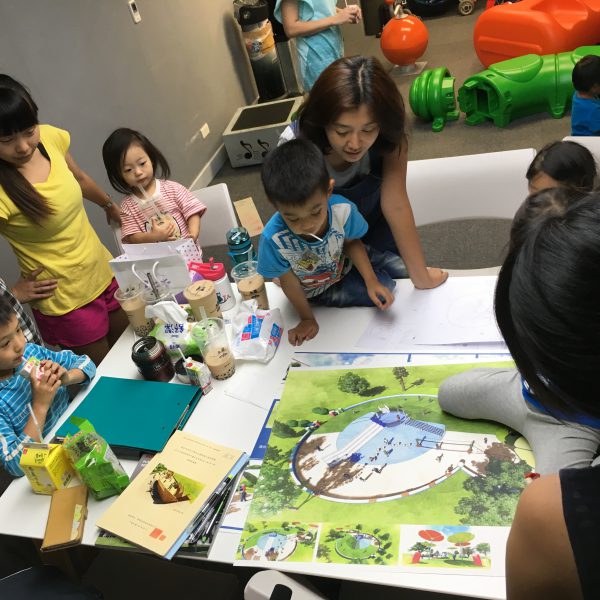