RETRIEVAL OF PUBLIC PLAY SPACE FOR CHILDREN IN TAIWAN 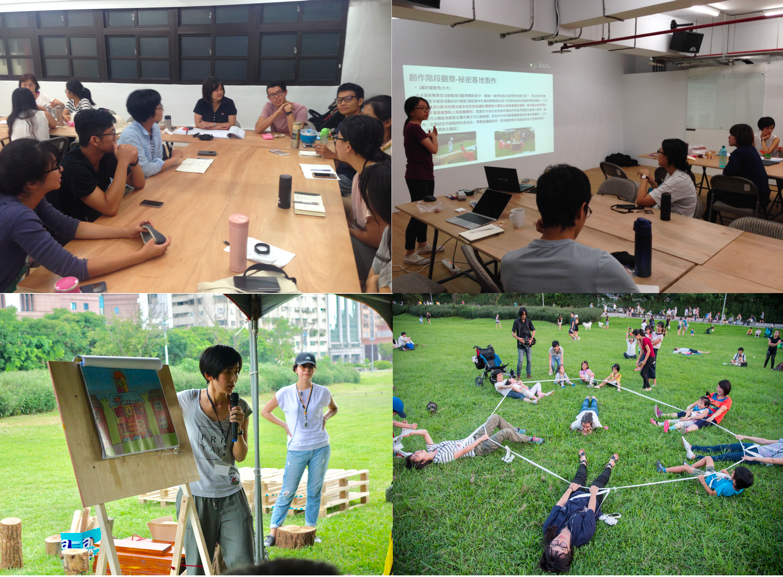 PPFCC AS A CATALYST IN A COLLABORATIVE PARTNERSHIP

The functional role of NPOs for the government has long been observed as either supplementing, replacing, bypassing and substituting to gradually overcome what the government stagnates, or too ideal and too flattering to not be easily assessed its accountability and performance (Wu, 2012: 25-43). In this article, the PPFCC model in the retrieval of public play space for children in Taiwan is discussed to display the role of a group of advocacy activists can be, however, as having diverse functions instead of mere dual roles, as a catalyst in a collaborative partnership among children (i.e. 0-18 years old, space user, country citizen), private sector (e.g. designer, play equipment provider, builder), academia and the government.

As the first-ever attempt as a catalyst of a collaborative partnership among children, private sector, academia and government in Taiwan, the PPFCC model has been proven to practically and efficiently promote the occurrence of infrastructures and social services to fulfil children’s right to play and right to participation (SFAA Ministry of Health & Welfare, 2014). And for public benefits, for instance, providing opportunities for designers to create innovation and for play equipment providers and builders to fulfil larger domestic demands. Yet, most importantly, in easing heavy parenting loads for a wide range of families with a different socio-economic background in nowadays society in Taiwan. 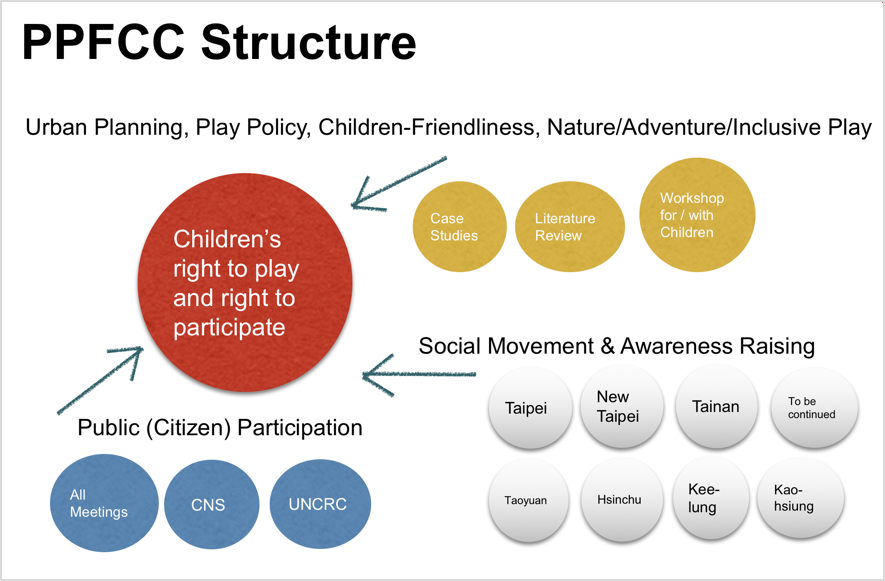 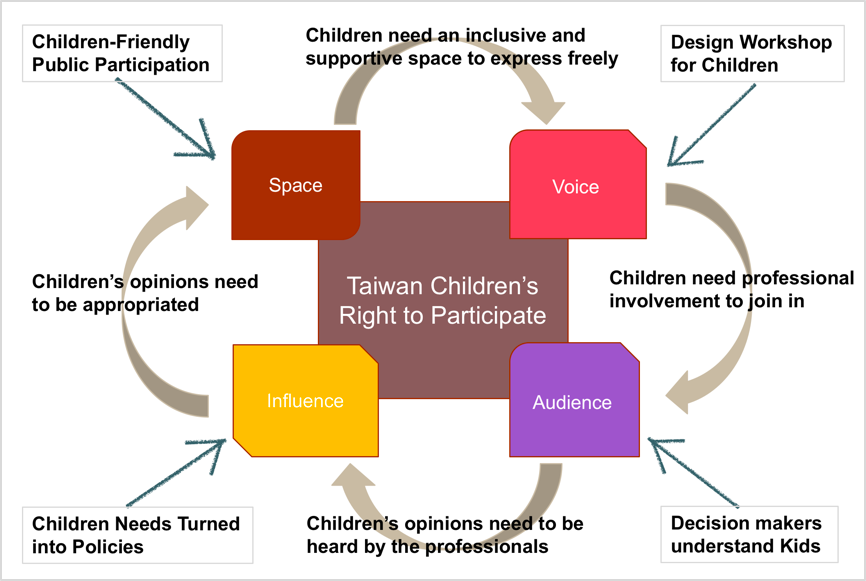 PARKS AND PLAYGROUNDS FOR CHILDREN BY CHILDREN (PPFCC)

Originated by a group of full-time mothers in the greater Taipei area, PPFCC started as daily park/playground goers, who observed a phenomenon of ‘canned-food playground’. Soon after, in mid-2015, they gathered in a Facebook group together with a Line group to discuss issues relevant to children-friendly public play space. Its initial approach was a press conference protesting against the removal of Pebble-Washed-in-Concrete slide and German playsets in Youth Park (and other PWC slides in two other parks) without any notifications to primary users – children and their carers. PPFCC full-time mothers (as the local media has named them) and their children brought with them ‘No More Canned-Food Playgrounds’ in front of the Taipei City Government Hall, and three advocacy initiatives proposed to be the fundamental requests to make a change. After two and half years, the PPFCC model has drawn the attention of more than 30,000 interested citizens from its social platforms (Facebook fan page, local community FB/Line group, parenting groups and playgroups) to together work as a huge virtual team.

The PPFCC model runs with the core value, echoing UNCRC, of ‘children as citizens have their right to play because play is their soul in the growing-up process; and children must exercise their right to have their voice in the decision-making process in public space wherever they go’. However, in Taiwan, often children were encouraged to only be children in playgrounds, where limited budget and risk-averse planning took place. PPFCC raised awareness of changes made for children’s rights by requesting that:
1. Children’s playgrounds use no more Canned-Food playsets (i.e. KFC – Kid, Fence, Carpet, or McDonald’s model; poor quality of PE/PU/ PVC material, lack of design, and with play functions merely for kids aged under 4-5 years old).
2. Children deserve to be given back various types of parks and playgrounds designed with natural materials, local features/ characteristics, community needs, diversity of play functions; these fundamental elements are to be designed according to needs or opinions of children themselves.
3. Cities in Taiwan should become as children-friendly and playful as a comprehensive children’s playground because ‘play’ is life core for children; hence, ‘play’ shouldn’t be restricted to merely playgrounds in parks, due to children’s right to play in UNCRC.

THE CATALYST: THE PPFCC MODEL ITSELF

PPFCC was invited by the City Governments, and have participated on all scales of playground design meetings. They have changed the SOP and mechanism of playground design/build projects, turned playground signs by using a children-friendly and positive tone rather than authoritative demands with restrictions. They have helped design signs and layouts of new playground restrooms into all-gender/family-children-friendly ones, held playground design workshops with children, led talks and lectures for government officials and citizens to know more about children’s rights to play and participation, translated articles of design cases from around the world, and written advocacy articles related to all advocacy issues.

PPFCC full-time mothers, who had their expertise on areas such as Law, Politics, Accounting, Journalism, IT, Children Psychology, Early Education, Children’s Health & Development, Occupational therapy, PR, Marketing, Language & Culture, Translation & Interpreting, Urban Planning, Landscape Design and Architecture,
have autonomously self-taught themselves to be able to interpret children’s voices, integrate academic resources, assist the private sector, and all government officials to design-think and think ‘out of the box’ of CNS (Chinese National Standards). The play policy has then gradually swung away from a risk-averse one and swung into a more ‘children-centred’ one with children’s best interests of well-being since 2015. 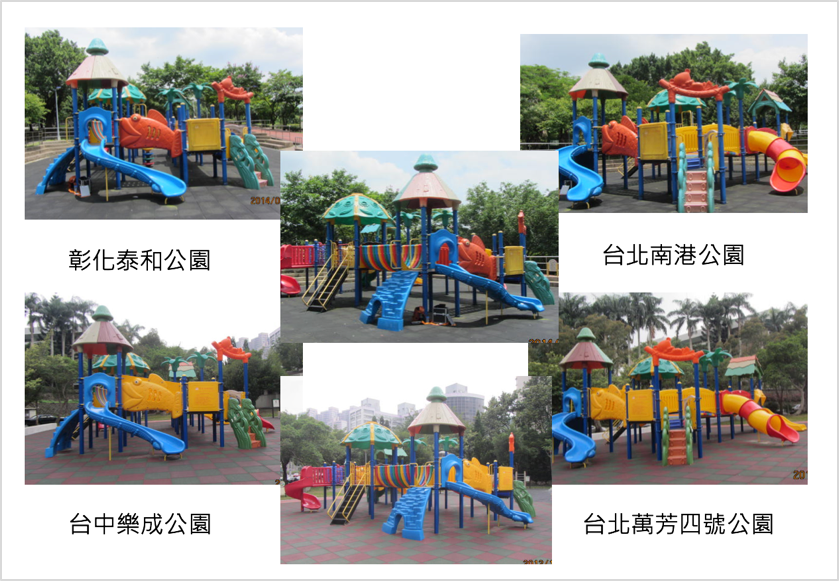 Children in Taiwan are faced with Canned-Food Playgrounds, where they all look the same.

Furthermore, PPFCC full-time mothers use their powerful skills of networking to involve the old media (TV, Newspaper, Magazine, Bookshop, Publisher, Radio and Conference) and new media (Facebook, FB Live Shows, Line, Online Forum, Blogs, Plurk, Epaper, and Digital Coworking App) to gain the attention from audience from parents to professionals. In the end, the advocacy has gone beyond issues for children and their carers only, instead, it has caught eyes as well as dedication from people of various fields.

CHILDREN’S RIGHT TO PLAY AND RIGHT TO PARTICIPATION

In the PPFCC model, the change had to start and occur in playgrounds first, so primary users – children – can satisfy their needs at a certain level before they further their civil rights to have their voice heard in the decision-making process. Once the model’s been exercised to the best possible extent, the practices and experiences from the model can be implemented to public play space like parks, to community shared space, to city squares, to streets/roads to be returned to kids to play, and to the entire city (i.e. as one of PPFCC’s advocacy claim – the city is children’s playground), and eventually to be implemented in other public infrastructures for children and their carers. UNCRC Professor Lundy’s children participation model then can be implemented in the PPFCC way to extend to the whole island of Taiwan as a bottom-up mechanism.

AN ORGANIC AND EXTENSIVE COLLABORATIVE PARTNERSHIP

By March 2018, the PPFCC model has been successfully amended, optimised, redesigned and rebuilt nearly a hundred playgrounds in the northern Taiwan area, children-friendly facilities in parks have been refurbished upon requests and surrounding infrastructure has been renewed under the children-friendly principle.

A new PPFCC advocacy proposal of a city policy has been announced and evaluated to (1) have school playgrounds to be open for more public play space, (2) hold play events like No-Car Days or Play Street/Road, (3) increase more budgets on public play space, (4) top-up public play space like ‘adventurous, risky and challenging’ playgrounds to gain diversity, and (5) to establish ‘Satellite Playground Grid’, which several small surrounding parks each contain certain play functions to compensate each other for local community users. It’s a gradual but long-term retrieval of children’s public play space, however, it certainly is an initial phase toward a city at the eye level for children.

TAIWAN HAS LEARNT FROM PPFCC…

In the nearly 3 years of PPFCC’s advocacy, Taiwan society has learnt that it doesn’t
even need formal Non-Profit Organisation to make social changes to happen in the traditional approach of supplementing, replacing, bypassing and substituting a government; in contrast with the previous, the PPFCC model has proven an innovative and organic approach to bring social changes by the collaboration among children (primary user), private sector (realiser), academia (supporter) and the government (financer) with the help of the catalytic advocacy group of PPFCC.

The following perspectives have been observed, and in the near future, can be closely pursued and further studied:

1. The PPFCC model has worked out very well in certain cities in Taiwan, however, other cities in Taiwan haven’t caught up with the progressive trend of exercising children’s right to play and participation using the proven approach.
2. The women/mother power has always been the major dynamics in the advocacy group of PPFCC and the members seem to support each other and juggle their roles in a practically balanced way.
3. The tipping point hasn’t shown up yet for the PPFCC members’ intrinsic motivation to decrease to continue their catalyst role for the collaborative partnership, even the constitution it has turned even complex.
4. PPFCC members still believe in their working model and will proceed on regardless of obstacles such as power plays from political parties or NGOs of relevant issues. 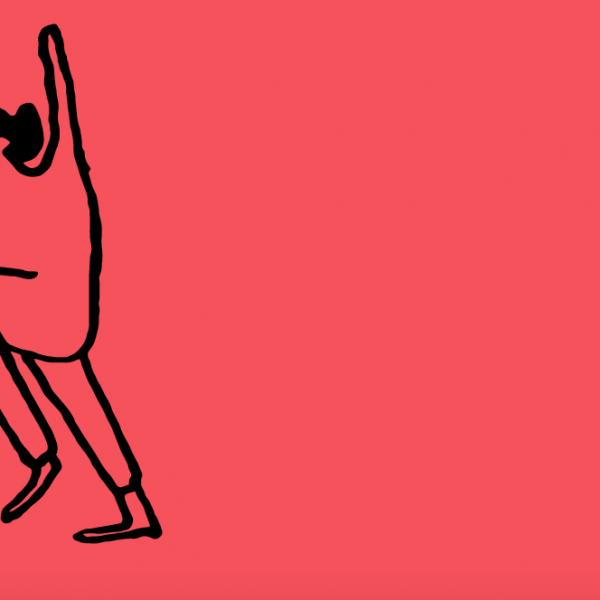 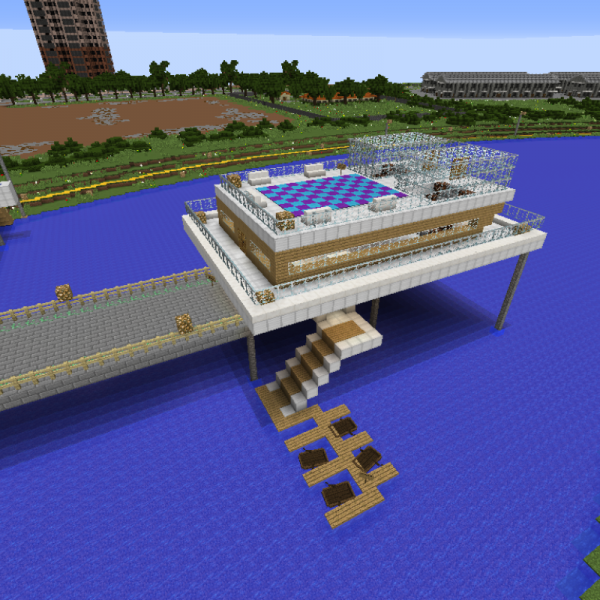