ART OF THE PATH

Practically speaking, placemaking is turning physical public spaces into places that support human interaction, economic exchange and well-being. It is a continuously dynamic process, not a static set of amenities, objects or activities. It comes from the people and involved everything we experience at eye level. Placemakers are the instrument to mobilize the community. It’s not about design, but about personalities, destinations, activities, and connections between people. The process empowers everyone including residents, businesses and local government as co-creators and modifiers of place.

It’s not only about one place, like a park or a square or a building. Placemaking aims to transition the street back to a series of places, a series of activities. This used to be normal, daily living: we walked down the street to our local post office, then to the hardware store, cheese shop, baker, deli, etc. We call it the art of the path. These are all places that attract people in different ways. Continuity of these activities and the frontages existed in a way that is now foreign to us. With modern development models, we’ve lost the ability to create places or nodes of activities along the street. We have to be much more engaging about understanding street life and life on the sidewalk.

The community is the core of the pl acemaking process

Placemaking comes from the community, in the broadest sense of the word. Initiating the placemaking process only makes sense if it is supported by various communities in the immediate surrounding the area. The key is to get different stakeholders present, from local residents, children, schools to businesses and institutions, entrepreneurs, and all kinds of initiators to share their dreams for a place and then actually put it into practice. The (unofficial) leaders of placemaking are the “zealous nuts”, the visionaries with a poorly developed sense of fear and no concept of the odds against them. They make the impossible happen.

The others: designers, developers and corporations

Besides the community, designers (and architects) can be a part of the approach, but they are by far not the most important. Only designers who can think about the organic and natural craft of shaping the place should be involved. We are hesitant to include designers because oftentimes they are focused on creating visual experiences rather than emotional experiences. When designers talk about their designs, we often miss the deep attachment that we talked about earlier.

Developers are another group. There’s something to be said about the scale and type of development we’re doing today. The scale is too big, and the wrong people are making the decisions based on the wrong  reasons. We need a new type of development that’s smaller, more concerned with the street. One big building is not a strategy. If big projects are broken up into smaller projects, then there can be a strategy. People are beginning to understand what we’ve lost. People don’t just want a physical place, they want a place. Placemaking is the operative word. We don’t think developers have ever been asked or given the chance to think about placemaking or how their projects are impacting the public realm; they’ve relied too much on the architects. Developers want something new. The concept of placemaking is easy to explain to developers because it will attract more people and more money. Developers relate to that message. Placemaking is not about using more money, it’s about getting more return for the money. In the end, we’re all interested in the same thing: to create street life and new types of public spaces.

Corporations are also investing in new types of public spaces. We see using corporations as part of the solution as an important step. Southwest Airlines for example, is a major partner. They’re really looking for the heart of cities, and they want to create reasons for people to travel to these destinations. Since they’re not planning professionals they see it from a totally different perspective. True, it’s a business perspective, but they’re seeing it more holistically than the professionals working on the projects, stuck in their silos. Detroit is a fantastic example. Just as the city was hitting bottom and filing bankruptcy, it was coming up: we put a beach in the heart of the city! Now that was a bold statement, made possible with the help of Southwest Airlines.

The solutions we’re talking about are programs that are lighter, quicker cheaper.They’re temporary. People can relate to that. Both developers and corporationsare less afraid of temporary solutions because it’s not a lot of money. If an intervention doesn’t work, we can experiment and try again. It allows for experimentation.

Placemaking is a movement, a way of life

In Italian everyone knows what a piazza is. It’s the gathering place where people come together. It’s a way of life. People are deeply attached to their local piazza. That’s the feeling we’re trying to create. Placemaking is about that deep attachment. It’s more emotional. Just as the piazza is the place to gather in Italian neighbourhood, placemaking has become a way of life. People want to live in a place and cherish it. They want to participate and connect with other people.

We’re seeing a major shift from physically creating a place to living in it. This transition takes the process out of the hands of designers and into the communities. We see communities becoming far more engaged in this process. It’s something that people own; it’s their process and their outcomes. Also, the audience is younger, more adventurous and understands the need for socialization. They are ready and get it. They want accessible services and amenities. Placemaking preserves those needs and also cultivates it. It’s not design-based. The process can include local designers, but it’s more about people than place. The creative energy is palpable. It’s a whole paradigm shift and it’s a big deal. 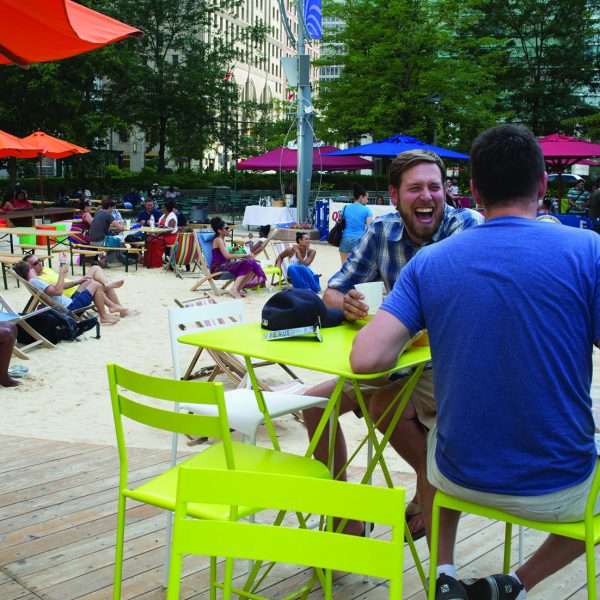