THE BELFORT SQUARE:
FROM A BLEAK SQUARE TO A
BOOMING RESTAURANT HUB

Almere Centre had started to deteriorate shortly before the onset of the economic crisis. Entrepreneurs, owners and the municipality realised that something had to change, so they joined forces. The crowded outdoor cafés on the previously deserted Belfort Square are a testament to the success of their approach.

‘In 2006, shortly before the outbreak of the crisis, a huge area was added to our centre,’ explains Danny Louwerse, programme manager of the Almere municipality. He points to the ‘new build’ on the spacious square in front of City Hall, where it was already pretty lively for a Tuesday morning. ‘Many retailers moved to the “new build”, which in the years that followed created an enormous vacancy rate in the old part of the centre. The remaining retailers rebelled and the situation escalated increasingly.’

It was evident that something had to happen. In 2011/2012 the Centre Partners (see box) hired the creative consultancy agency Fresh Forward and the Next Level trajectory was started. They came up with the plaza strategy: a vision for this area, in which placemaking was central and where every square had its own identity. The common theme was: there is always something exciting going on in Almere, the eternally young city. 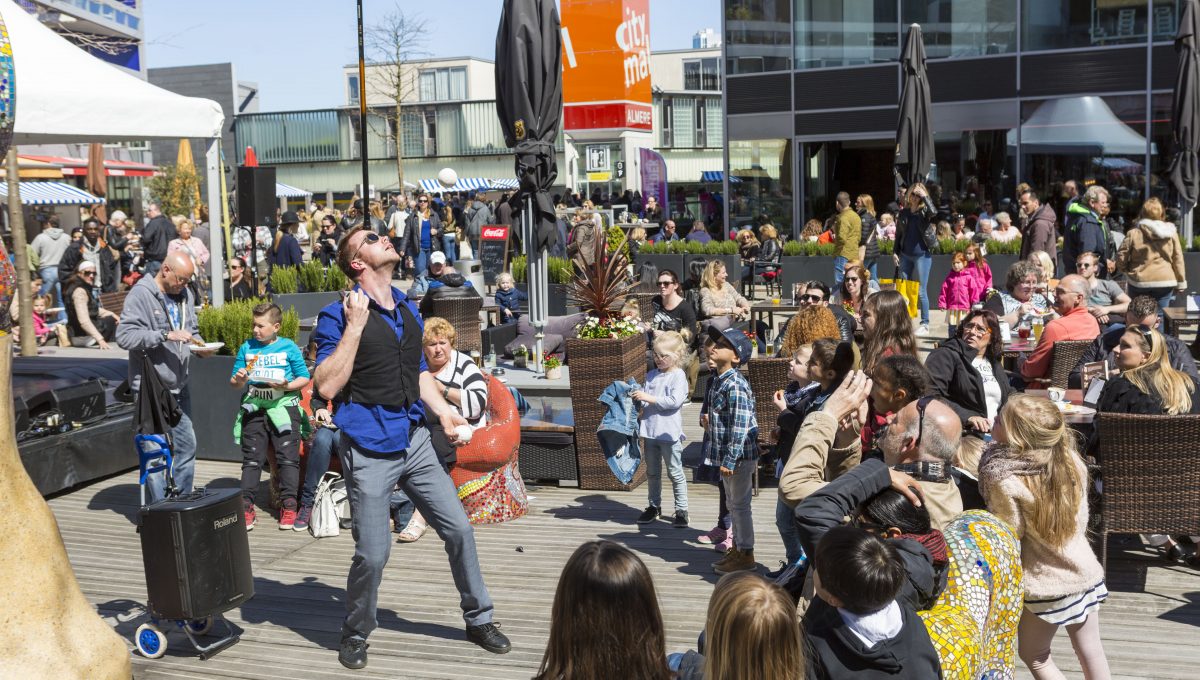 An editorial board was subsequently established in which all important parties were represented: the major property owners, the trade association, the residents, the colleges, Almere City Marketing and the cultural institutions. Together they explored the options. What do we have? How can we give shape to the plaza strategy?

‘Starting in 2013, the Centre Partners began to ‘practice’ on Belfort Square,’ says programme secretary Marijke Kuijpers. ‘When you walked across Belfort Square in those days, you thought: “Help, I’m lost” and you wanted to get away as quickly as possible. It was just outside the centre; there was a hairdresser, a fshmonger and a small shop from the municipality. That was it! Belfort was a bleak and empty square nobody wanted to go to.’

That is hard to imagine today. Children whiz down the slides next to the stairs that provide access to the square. The restaurants and other hospitality establishments that are now located in nearly all of the premises have awnings in soft hues, and colourful planters form the separations between the outdoor cafés. The identity assigned to Belfort Square in the plaza strategy concept can be summed up as ‘indulgence’: ‘It’s simply crowded every night.’

The reason for commencing with the implementation of the plaza strategy on Belfort Square was that Unibail-Rodamco, which owned all of the premises there, came with an initial proposal to transform the square into a hospitality plaza. 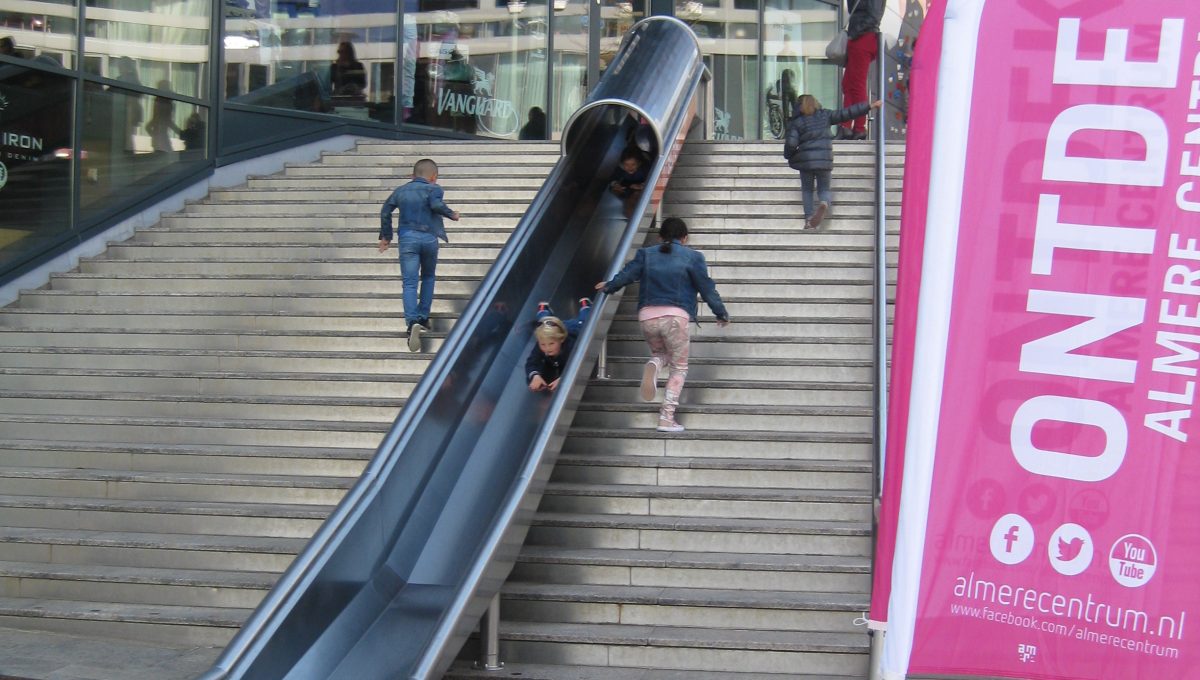 Slide on the stairs

However, that meant that the businesses established there had to move. ‘They were very understanding,’ says Louwerse. ‘Everyone knew: we can’t continue that way; nobody was making a living anymore. So when the editorial board asked whether they supported their relocation, they replied that they didn’t really want to leave now that things were getting better, but that they understood.’

Apart from these relocations, the outside space underwent a redevelopment and all entrepreneurs worked jointly on the programme. A kiosk in the middle of the square, which had been vacant for ages because the owners couldn’t make a go
of it, was demolished. Unibail invested in the awnings that give the square a Mediterranean fair, and the new businesses made a one-time investment in the public space. Louwerse: ‘A case in point is the slide and the trampoline near the stairs. Together with the editorial board we decided that if we want to be an eternally young city, we have to
provide a place for children where they can have fun while their parents are sitting in the outdoor café. And that’s when we came up with great features such as the trampoline and slide.’

The colourful stickers on the windows effectively distract attention from the few buildings in the plaza that are still unoccupied. In order to optimally facilitate placemaking, the department Vergunningverlening Toezicht en Handhaving (Licensing, Supervision and Enforcement) is currently working on transferring the responsibility for outdoor café licensing to Unibail so that they can plan the outdoor cafés without hindrance. Louwerse: ‘We are shifting the responsibilities increasingly towards the owner. Why not? They invest millions in this space and they want to recoup their investments, so they don’t take measures unless they believe they’ll be successful. Moreover, the tenants only have to deal with one party – it works better that way.’

Louwerse did not venture to predict whether this would ultimately lead to the full privatisation of the public space. ‘We keep taking small steps in this direction. The clean-up of the space, for example, is partly already in the hands of the property owners.’

Monitoring research revealed that the Belfort Square’s appeal has increased tremendously. Its current image is that of a vibrant square where there’s always something to do. This is attributable not only to the redevelopment but certainly also the placemaking efforts. For instance, Unibail has concluded an agreement with the entrepreneurs that entails experimenting with a variety of activities. One of the events is a monthly cooking workshop given by a well-known chef. In addition, there is an annual Outdoor Café Festival that runs through the entire city, culminating at Belfort Square in all sorts of samplings and tastings, as well as live music. Louwerse: ‘The idea came up when we had podiums set up that weren’t used between King’s Day and Liberation Day on 5 May. What a waste.’ 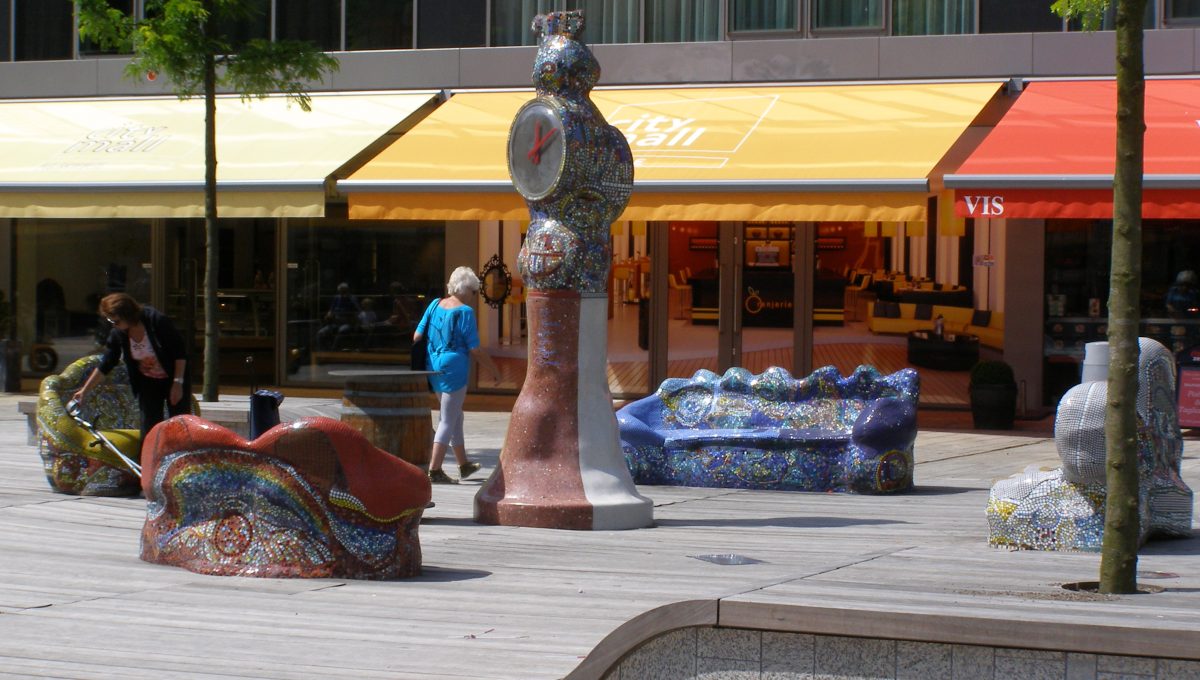 Another example are the urban gardens. Grass mats were rolled out throughout the entire shopping centre and rented out to residents and entrepreneurs, on which they could sell sustainable products. Kuijpers: ‘The idea for this festival came from the editorial board and the Trade Association took the lead in the implementation. In fact, the municipality only issued the licences. It’s amazing: people queue up to secure such a mini garden!’

Three years after the commencement of the transformation, the only minor problem remaining on Belfort Square is the mosaic-embellished clock: ‘Belfort needs a clock, but this mosaic clock has already been moved once before and now it’s in the way again because there is a need for more outdoor cafés.’

The successful placemaking project in Almere Centre is, frst and foremost, the result of a close collaboration between the parties involved. The new Belfortplein (Belfort Square) has been initiated and realised by:

The first steps on the way to the transformation of the next two squares will have to be initiated before the end of 2017: the Esplanade and Stationsplein (Station Square). But first, Louwerse and Kuijpers want to experiment a great deal more with placemaking by organising small-scale events with the city. A case in point is a mini beach that will emerge shortly on the Esplanade and where student associations can hold beach volleyball tournaments. Louwerse: ‘We want to involve the city as much as possible. Otherwise you may end up with a beautiful square that no one uses… We don’t want that to happen. That’s why I often walk around the Esplanade in the early morning to observe where it is dirty. Because that means people have sat there and those are the spots we have to focus on strongly. In my earlier days at urban regeneration I witnessed that a former desire path was blocked off with a fence. It would have made more sense to build a walkway there, because that’s where people use the city.’ 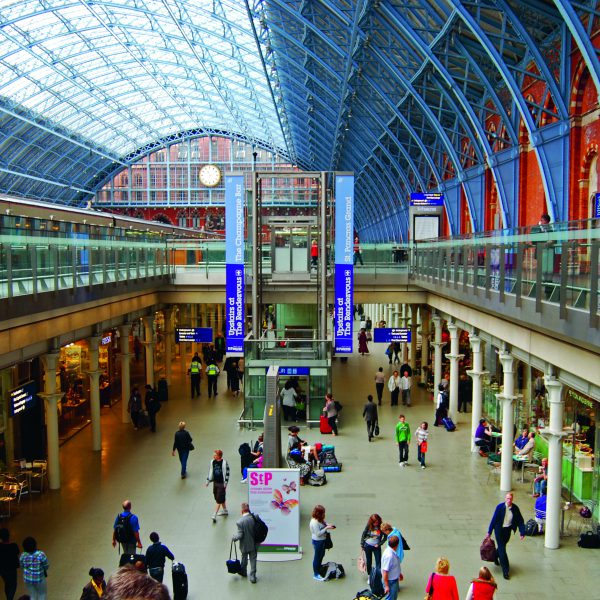