A PLEA FOR
FLEMISH PARKING

All well and good, not all plinths are equipped with cosy storefronts and restaurant terraces. It would be irritating if every street, without end, enticed you to buy, drink and eat, especially if you are penniless. A city needs some boring façades, if only to be unseen in the midst of all these people. A city also needs garages, containers, service entrances, connections, and installation spaces and it is needed that they are not denied or hidden in a ludicrous way, but treated as equals in public space. Maybe it requires even more attention because the functioning of the city is increasingly dependent on installations and suppliers. Therefore, this is a pledge for more attention to the interaction between the plinth and the car and technical communication, with the Flemish parking as an example.

In the glorious days of the 50s, Flanders obtained an American profile with a real car culture. The car was not put in the street to show off, as is usual in the Netherlands, but neatly placed in the private parking lot, which was designed to integrate with the home. Already in the Art Nouveau times, the garage doors were often higher quality than the people’s front doors and the modern 50s houses were equipped with even larger garages. Where the Dutch have their glass-curtains, a typical Flemish has a wide garage door. And unlike the Netherlands, drive-in houses are not a privilege for the suburban lifestyle, it is also an urban phenomenon that strongly shapes the appearance of the streets of a city like Antwerp.

Integrated private residential parking in Flanders is now usually not used as parking anymore: your own garage door with the sign wegsleepregeling (“cars will be towed away”) is a guarantee to have a reserved parking space in front of your own door in the busy city street. The fact that the street is filled with parked cars is partly because every Antwerper is allotted two free parking permits from the city. And most of the people in Antwerp, despite the large bicycle facilities and ample public transport actually own two cars. Because even though you could do without, why would you? The garage is obviously used as an extra room and storage area for the expensive racing bike, the dog basket, and tools. The private garage is the urban version of the rural farm. On an average Saturday the garage door is open permanently, and brings a lively exchange with the street. It is a pleasure to peek secretly in the garages looking for collections of license plates, calendars, failed inventions, and lost toys. No shop window can beat that! 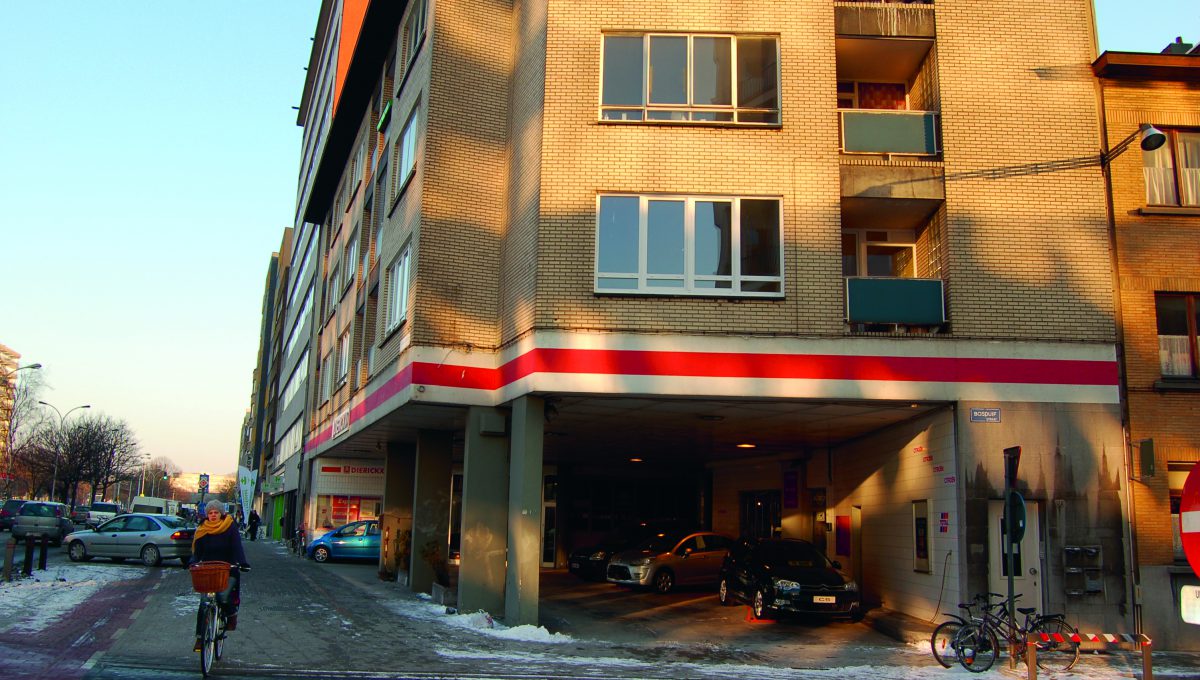 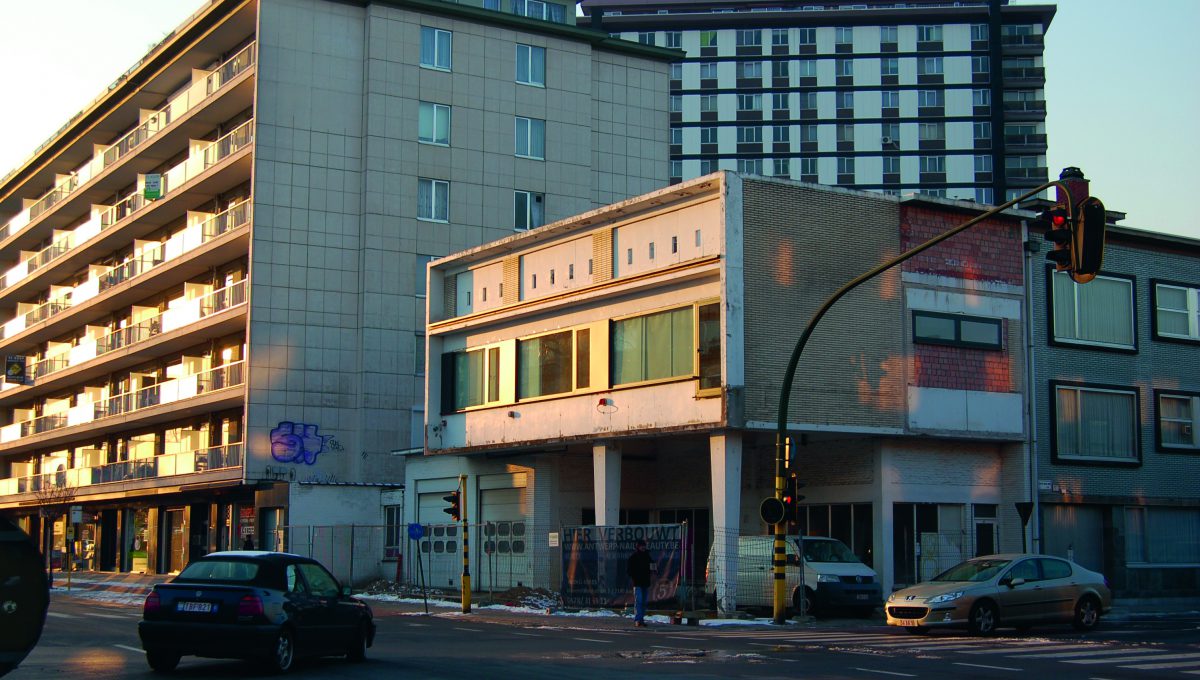 In the district Borgerhout, garages are often used as a workshop and start-up spot for entrepreneurs, or to trade for import and export, lot sales, repair spaces and rubbish caves, in where for decades no sweeper has been through. Maybe not everything is completely legal, but yes, Apple, Google, Amazon, Barbie and Microsoft also started in garages, why would a subsidized incubator be more successful than a garage in an urban district?

Also, gasoline stations and repair garages in Flemish cities are logically integrated in the construction line. Chances are that at an Antwerp crossroads you’ll find a café, a shop and a garage, all on the same corner, all flourishing for years. The plinth of the building where the garage sits is set back a few feet to receive the car in a covered spot. The garage-owner sits next door in a beautifully designed glass box and maybe lives above. The entrance to a public car park or the repair garage is adjacent and the car park commonly occupies the entire inner area of the city block.

Access to a parking lot does not need to exceed a 2.5 meters width to unlock a new world and a wide range of functions. No wonder it is immensely popular in Belgium! But like elsewhere in European cities
the fun is over. Due to changing security conditions, the gasoline (LPG) stations shut down one by one in the mid- 90’s. And the small garages find it difficult to compete with the major car dealerships. In the better neighbourhoods, the released square footage from the closures are now filled with a glass façade and occupied by restaurants or offices. The less profitable locations remain in decline, endlessly waiting for a new proposal. Meanwhile, motorists are increasingly obliged to drive far outside the city to refuel or repair his car. 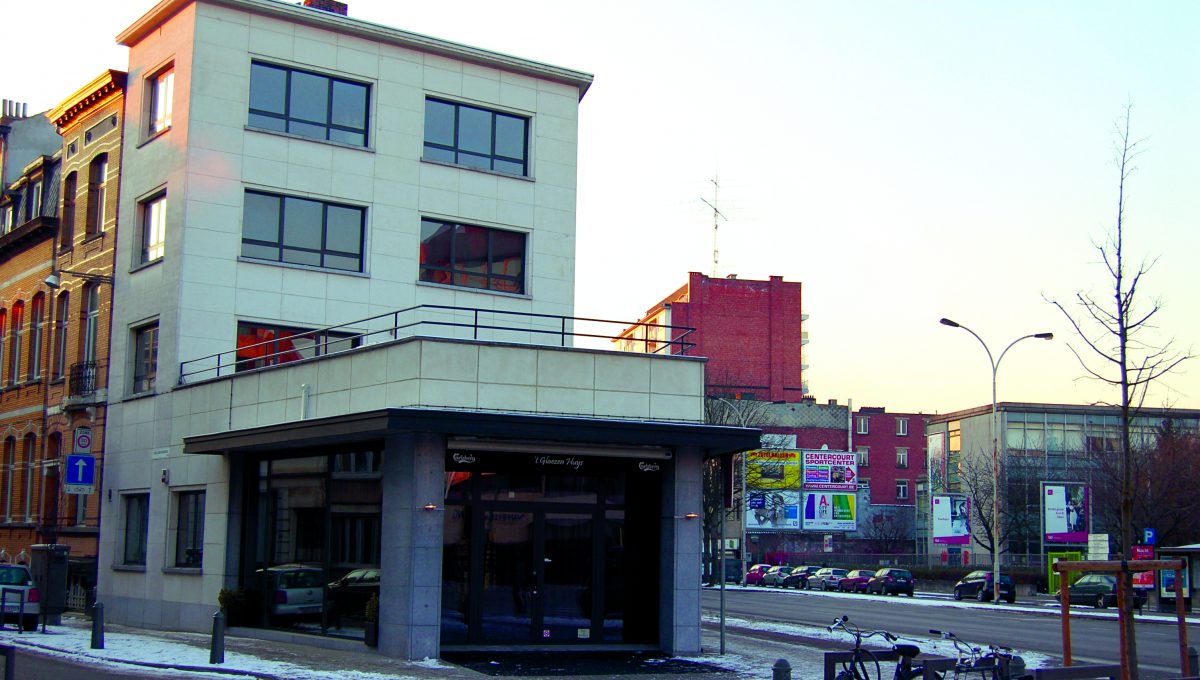 However, if we look a little further into the future, then the private car park and the local gas station could face a glorious future. A future where there is a need for an insured and nearby space for charging point for electric car, bicycle, tricycle, the fuel cells, delivery service and the necessary technical area for modern forms of working like co-working. In due time we’ll have to transform these polished windows with
geraniums all back to garages! 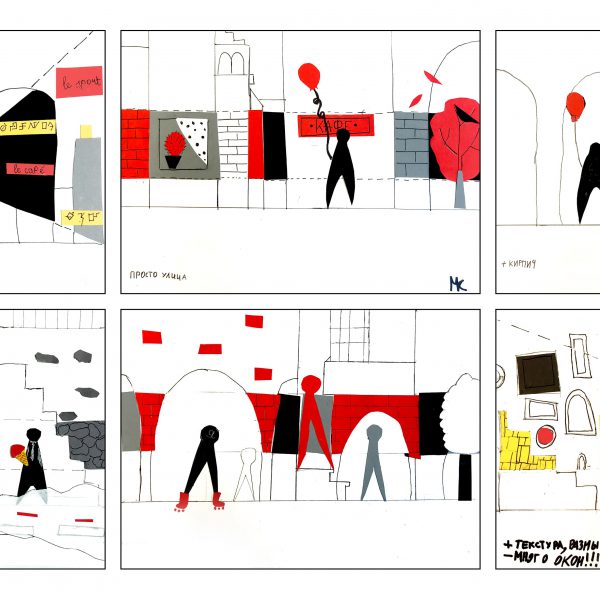 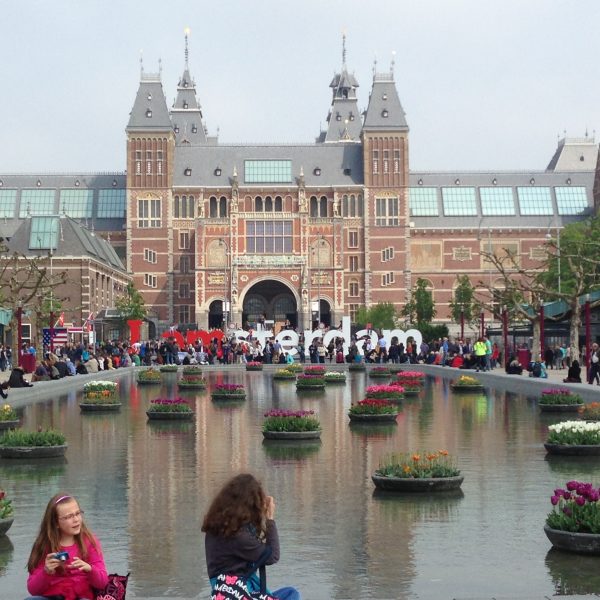