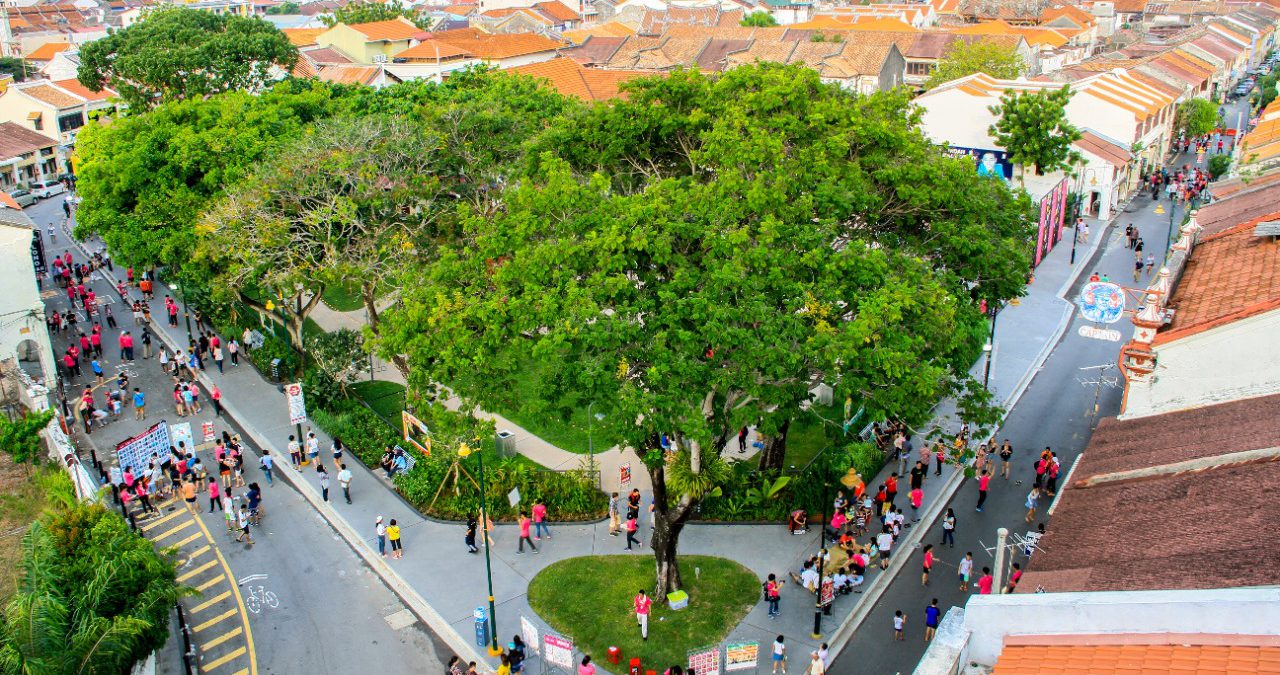 The Armenian Park and adjoining back lanes project focused on one of the inner areas of the George Town UNESCO World Heritage Site (GTWHS), with the aim of reinforcing a densely built-up residential enclave through the establishment of a community green space.

The park is located at the corner of Lebuh Acheh and Lebuh Armenian and is one of the very few open spaces in the denser parts of George Town. The open area measures approximately 2,600 m2 and lends itself to the creation of a community garden in a neighbourhood with limited public space.

The open space was the result of a fire that destroyed a number of buildings in the late-19th century. Over time, the space became an informal leisure space for residents of the neighbourhood. In the 1990s, the area was formally reorganised into a garden, and renamed Armenian Park. It was then turned into a flea market in the 2000s. Stalls were splayed haphazardly throughout the space, and greenery became sparse. The garden virtually disappeared under a layer of compacted earth, and its benches and light fixtures fell into a state of disrepair.

A series of meetings involving the Penang State Government, George Town World Heritage Incorporated (GTWHI) and Think City led to the conclusion that the flea market had kept residents and children away, detracted from the quality of the area, and impeded the development of social and cultural initiatives in the adjacent Youth Centre, a public building owned by the municipality.

Design and public consultation work began before the signing of the Agreement between the three parties. This project was included in the Greener Penang Programme sponsored by the Penang State Government and Penang Island City Council (MBPP). Think City, working with the Aga Khan Trust for Culture (AKTC), developed the concept plans to re-instate a public park, which were presented in two public engagement sessions. It was crucial to ensure the project was executed with all stakeholders in mind, and with an aim to eventually strengthen community ties. The original improvement plans proposed by the working committee lacked a diversity of use and didn’t encourage cross-cultural interactions between communities. After a temporary standstill, Think City proposed — with new insights from AKTC and more community input — a bolder design proposal.

It was hard to address the issue of the current users and occupants of the space. The current situation had made it unsafe for families and children. But the relocation of the flea market was necessary for the transformation of the pocket park into a multi-use and inclusive place. Many traders, especially those without a permit, were very afraid of losing their businesses should they have to relocate opposite a police station. After three months of negotiations, more than 100 traders suggested to relocate to nearby Pesara Claimant and eventually to Padang Brown. The decision of relocating the flea market and restoring the garden to its greater community function kickstarted a collective move to improve living conditions in the residential areas, building up a sense of belonging and raising social capital in the process. 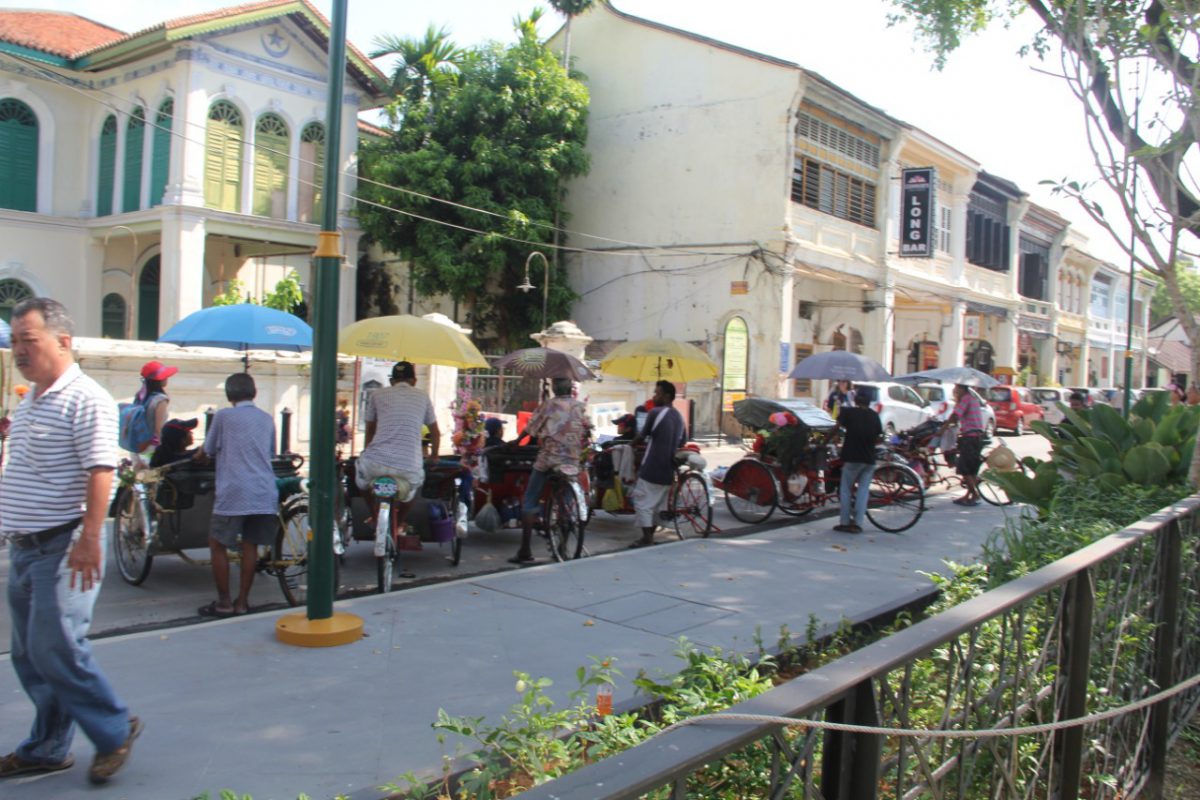 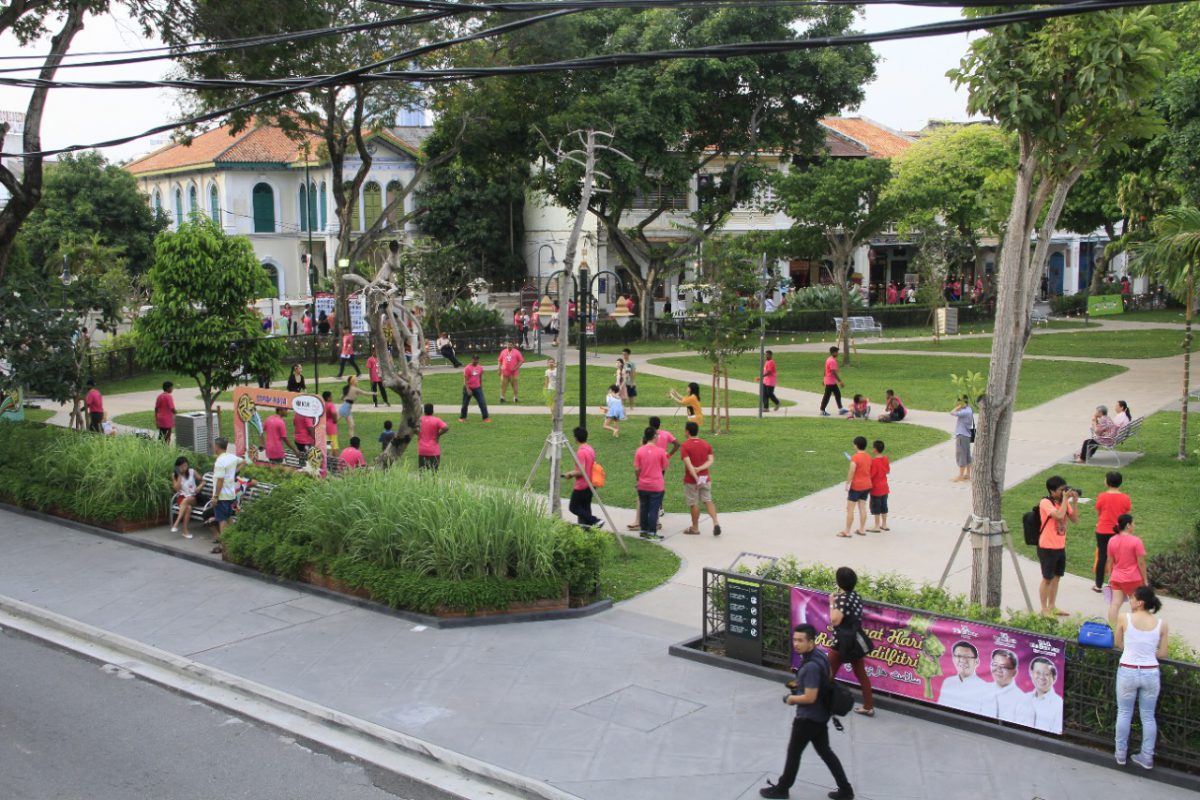 Throughout the process, Think City engaged with the community through constant dialogue. To further demonstrate the benefits of the plan, a pop-up park was created. All the materials used in the creation of the park had a story to tell, right down to the selection of indigenous plants reflecting a more local tone. The design created formal edges and side access points on the northern corner to increase accessibility. Mature trees were retained, with a network of paths incorporating seating to invite people to rest and stay. The design of the fence was inspired by a local rattan-weaving workshop nearby and the ‘Heaven and Earth’ feature wall between the green space and the multi-purpose court pays homage to the original Malay settlement at the site. Tactile elements were used as Braille maps after consulting with the National Council for the Blind and the Penang Accessibility Action Group.

Not only did the project fulfil George Town’s need for public open spaces, it also benefited tourism and business. The park is complementary to its surroundings, bringing out the beauty of the historical buildings. In addition, residents, businesses and visitors have augured well with the introduction of new cultural attractions in the neighbouring Youth Centre and Syed al-Attas Mansion — a mid-19th century structure owned by the Penang Island City Council.

Following its establishment, the park has had a higher diversity of public uses and a diversified set of visitors. While most of the time the park functions as a neighbourhood garden, on special occasions it is used for community projects including ‘Art in the Park’ and ‘Music in the Park’ during the George Town Festival and various periodic art installations. Popular with both local residents and visitors, the park is currently jointly maintained by George Town Conservation and Development Corporation and MBPP.

Following the completion of the park, improvement works commenced to improve the back lanes adjacent to the park so that the benefits of the park could be extended, like octopus arms. The pilot, in 2017, upgrading of the alleyways served as an experiment for open space solutions applicable to other secondary alleyways in the heritage area.

In identifying open space solutions, considerations in keeping with traditional forms and materials, improving the provision of public infrastructure and developing solutions that could be applied to other secondary back lanes in the heritage area were observed.

The Special Area Plan for George Town requires the use of porous materials in the paving of back lanes so as to better absorb rainwater. As a result, lime mortar, a material known for its permeable properties, was employed in the cementitious mix.

In addition, the traditional open drain lined with bull-nose bricks was re-modelled to create an efficient and aesthetically-pleasing solution compatible with the character of the heritage area. The project went beyond aesthetic improvements, exploring better ways to upgrade pedestrian spaces by eliminating leakage from pipes, creating more efficient drainage, installing safe electrical cabling and introducing greenery.

Eventually, through the expansion of the programme to similar spaces, it will be possible to create a cleaner environment, with increased community use and greater visual appreciation throughout George Town. 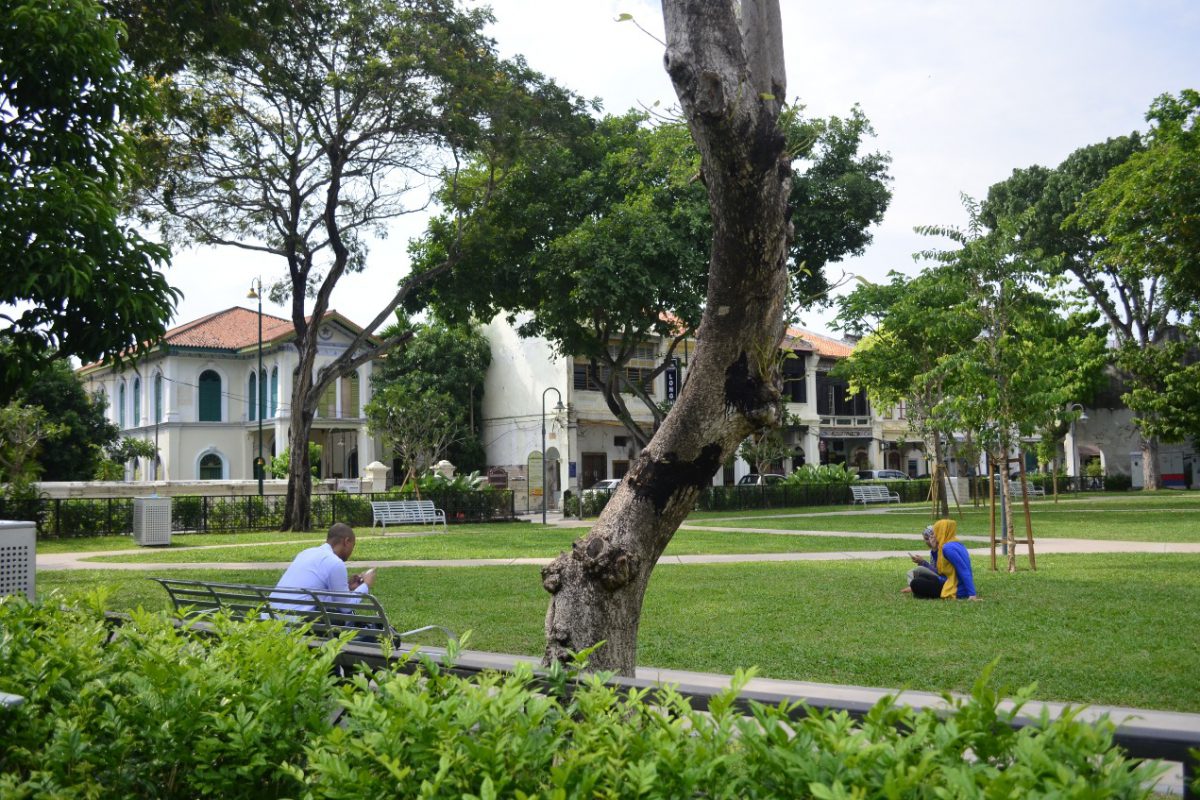 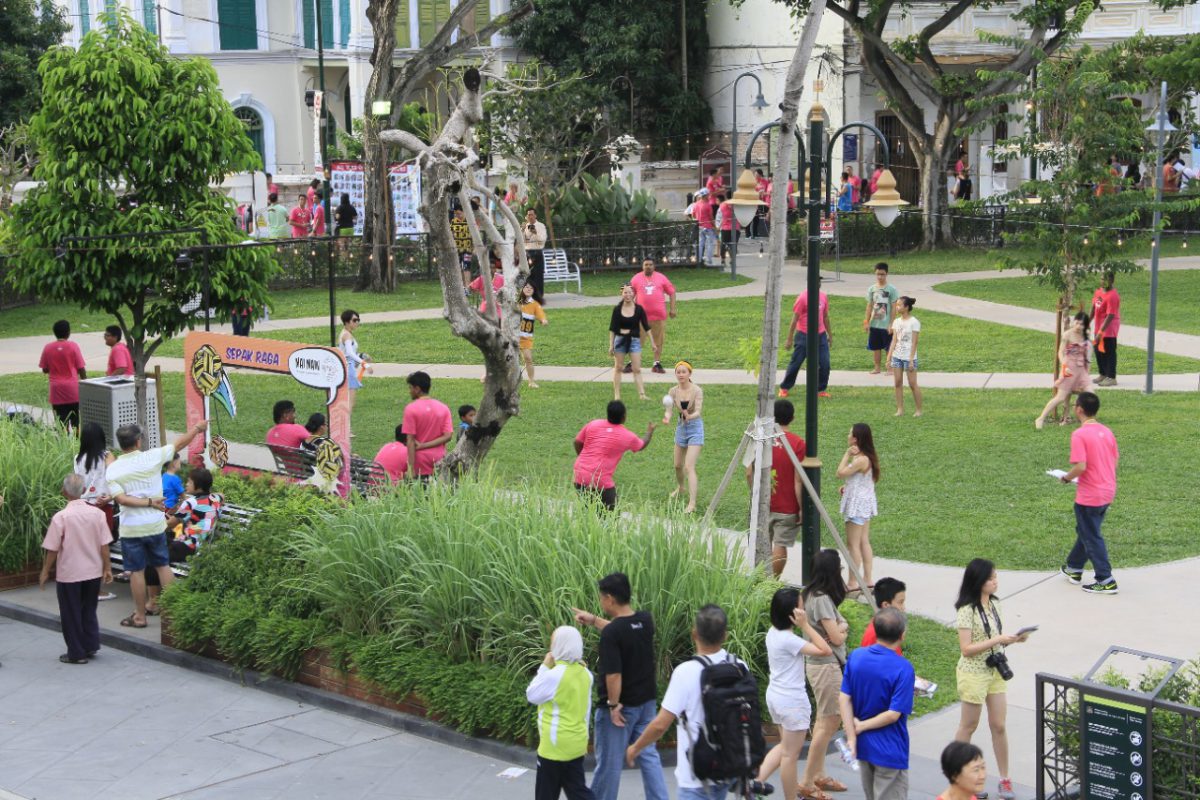 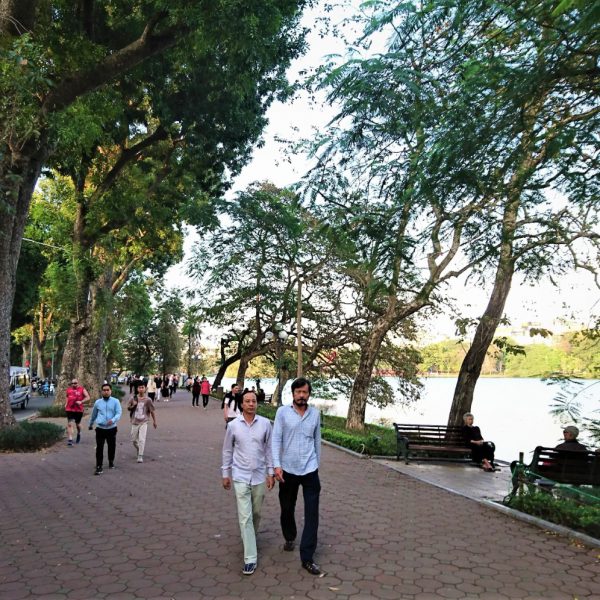 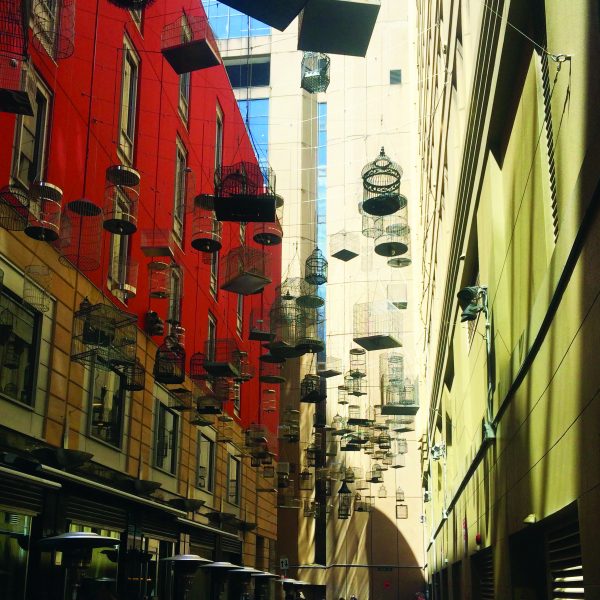