Lyari witnessed its greatest downfall during the brutal ethno-political war which resulted in raised urban poverty, negative media impact and isolation from other parts of the city. This densely populated town with many ethnical communities share limited public spaces that are compromised by illegal encroachments, criminal activities and dysfunctional resources.

It is in this time, 2004, Mrs. Sabina Khatri came across a case of child abuse which led to her frequent visits and association with the place and its people. She started Kiran Preschool program in a narrow, mid-rise residential lane of Baghdadi in Lyari as a sanctuary of wellness for the children of the community. In 2 years, the preschool was formally formed as “Kiran Ibtedai School” with 20 toddlers and their mothers in a trauma-sensitive learning environment. This distinctive approach aimed to target their households who can form a responsible and compassionate society altogether. In 10 years, the Kiran Preschool grew into Kiran Foundation with many initiatives which focused on holistic development. Moreover, under the government’s “Adopt-A-School-Program”, the neighborhood’s DCTO Government School was adopted in 2014 for bigger impact.

Streets function as primary public spaces in such dense settlements. The irregular Kiran Street acts as a play area for children, parking area for residents and pedestrian lane for commuters. Additional activities at Kiran makes it busier throughout the day. Moreover, people often gather in groups at nooks and corners of the street where exaggerated plinths of buildings become seating and interaction arrangement, known as “thalla”. These inbuilt platforms also act as points of small and portable businesses in the neighborhood, making them an integral part of their daily lives.

Unorganized vehicular and pedestrian traffic prevailed outside DCTO School, with its boundary wall completely vandalized. Located in a busy area, it was once a danger zone for the community. 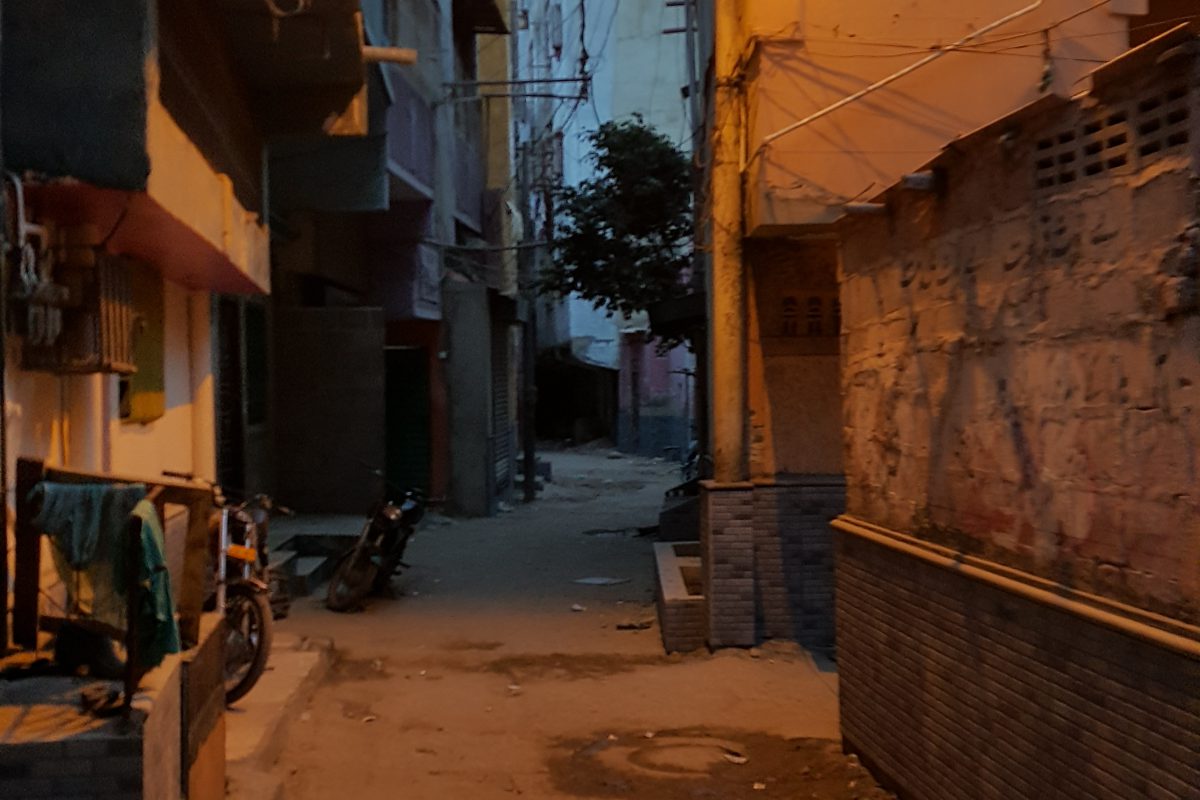 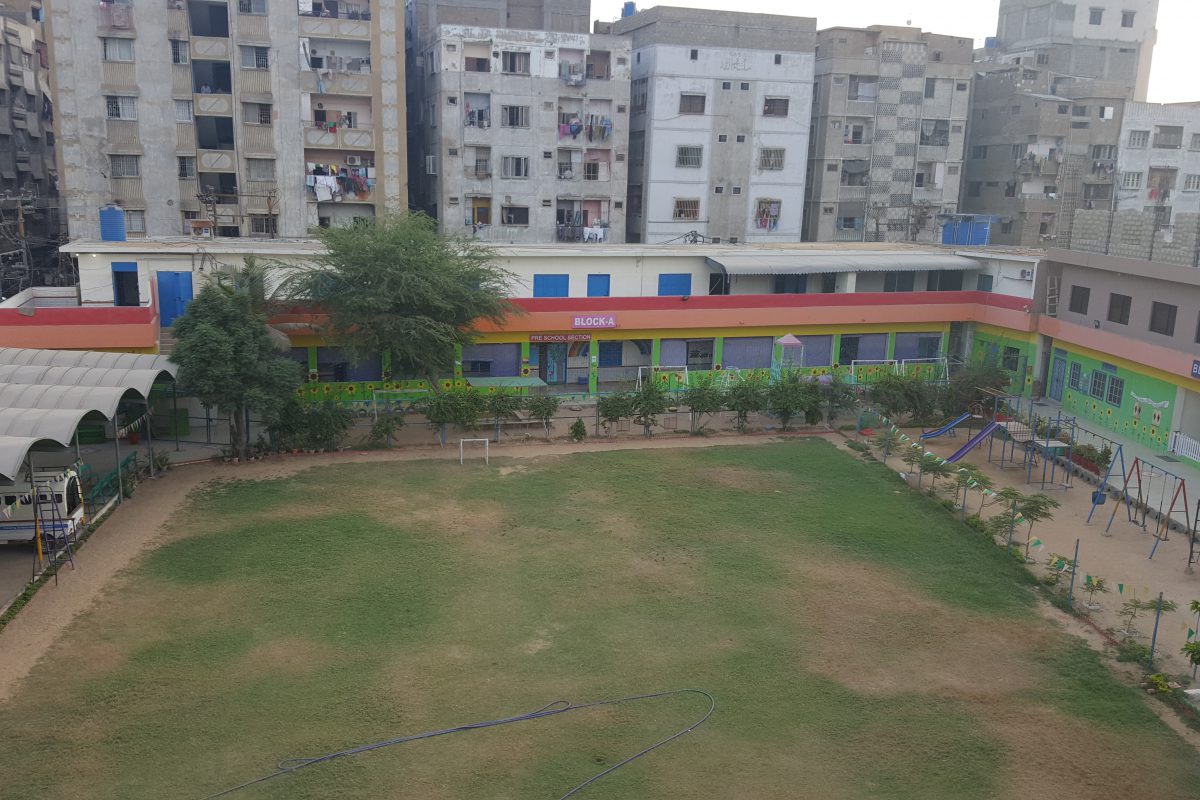 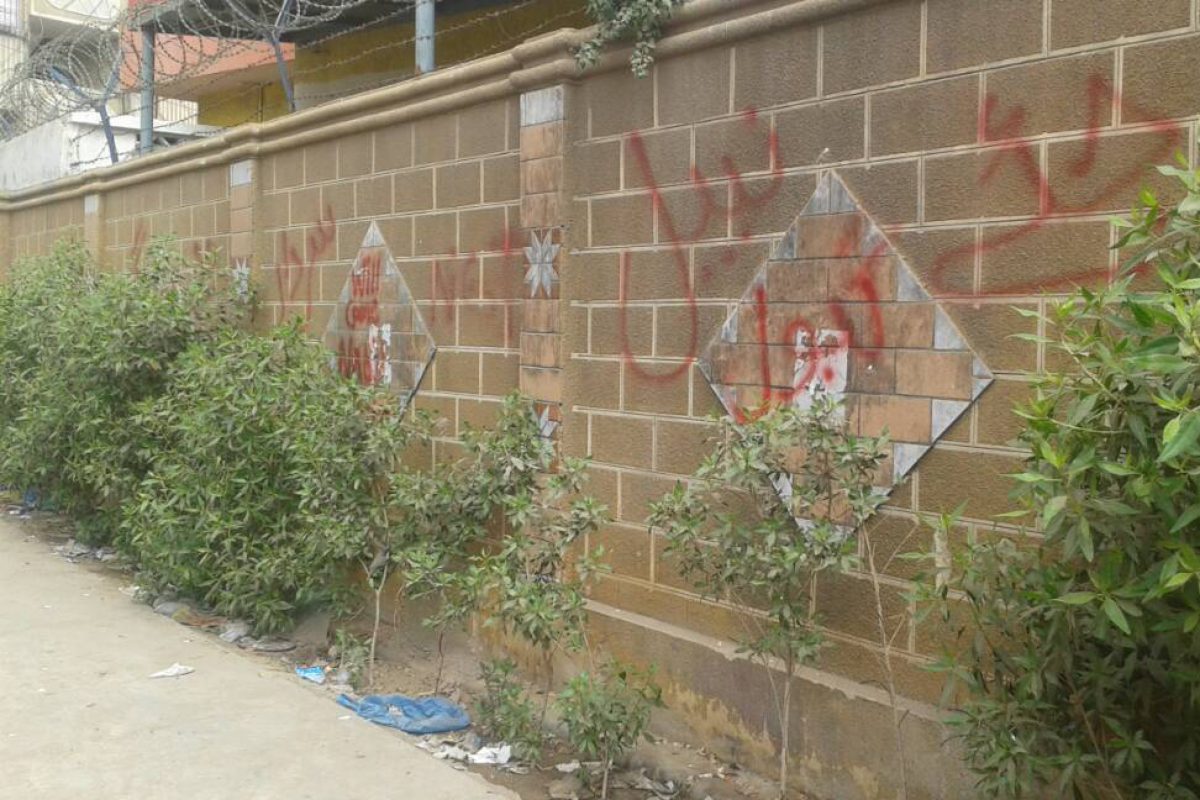 Rooftops are your best option if open space is insufficient.

The first step was to study the context and define potential street hardware. Community was involved for different construction tasks to build sense of ownership and to support them financially. Few visions for this outlook were:

The project which began in two rooms spread into Kiran Flagship, a four storey building and DCTO School of four building blocks. To organize all activities inside and outside the schools, a collaboration of Architect Aroosa Mushtaq, Architect Ali Khan, Team Kiran, government agents and the community began in mid-April of 2017.

Primary stakeholders, users and neighbors of the facility, became responsible for site actions. Various construction tasks, like wood or masonry works, were assigned to them.

The State and sponsors became the tertiary stakeholder with their financial aid and intangible support. Other sources of budget were various social events and business initiatives by the foundation and community. 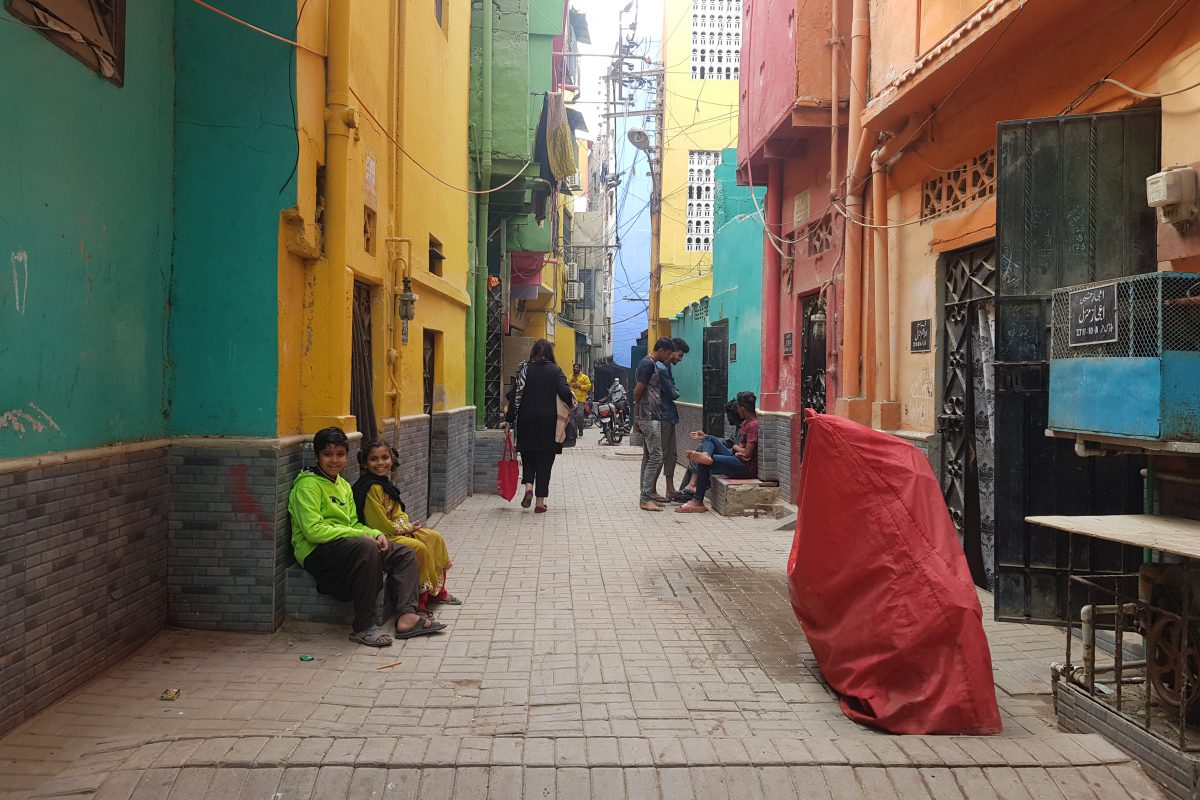 A moment captured of the Kiran Street after uplifting 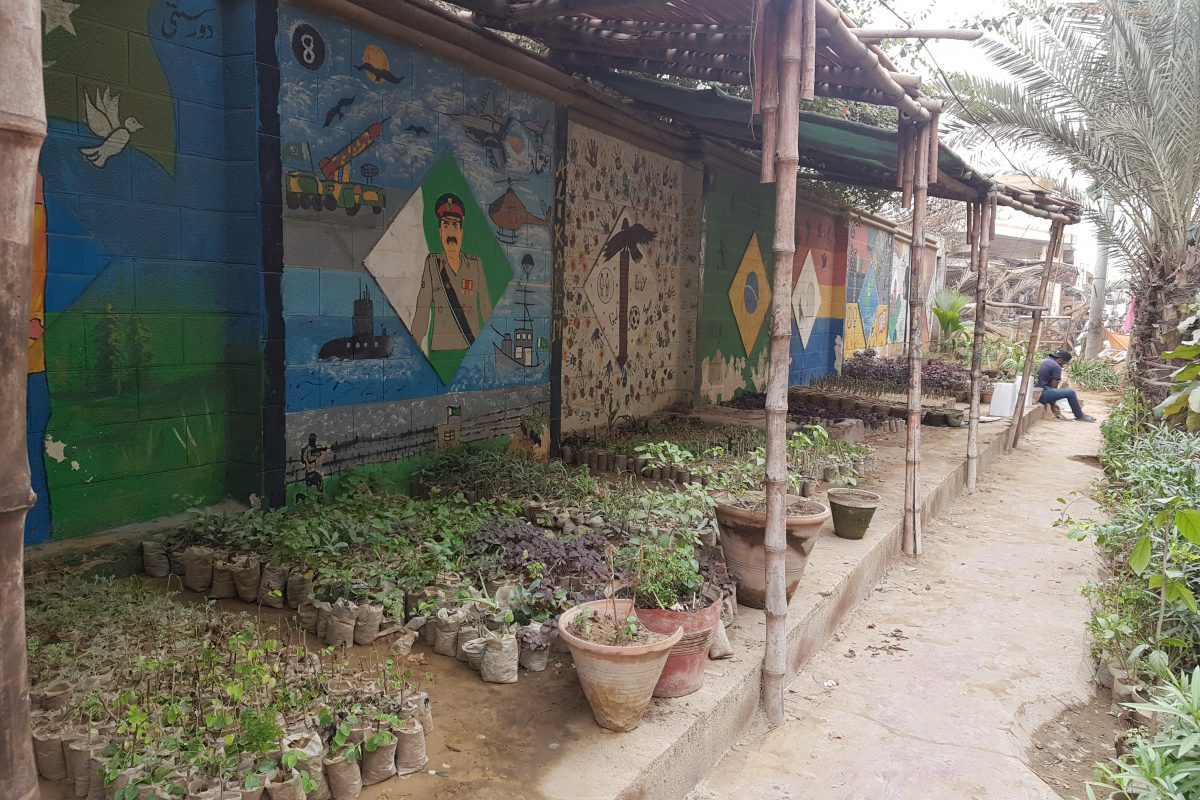 Painted boundary wall of DCTO School with a nursery

The façade of houses in the narrow street that led to the Kiran Flagship were painted with multiple colors that represent the vibrant culture of the community. The street was paved for commuters and pedestrians, thallas were built at every interval to celebrate this unique intervention, each house was given a name plate, and service lines were fixed to prevent drainage problems. For DCTO School, students painted the boundary wall as part of the school art competition which helped to reduce vandalism and increase sense of ownership in the community.

All programs serving the community, visitors, neighbors etc. were proposed on the ground level of the facilities. This helped in organizing the traffic and activity on the street, with a child-friendly and lively environment.

Rooftop at Kiran was converted into a children outdoor play area which was otherwise vacant. The irregular shape of the street which made many futile corners became locations for thalla, plantations and even a parking lot at the street. At DCTO School, a large world map and an interactive life-size chess floor became part of the landscape.

Aroosa Mushtaq is an architect, graduated from the University of Karachi, Pakistan. Her current work interest includes contextual research based urban and social project with Kiran Foundation. She is passionate about small interventions that make bigger impact in a built environment for its users. 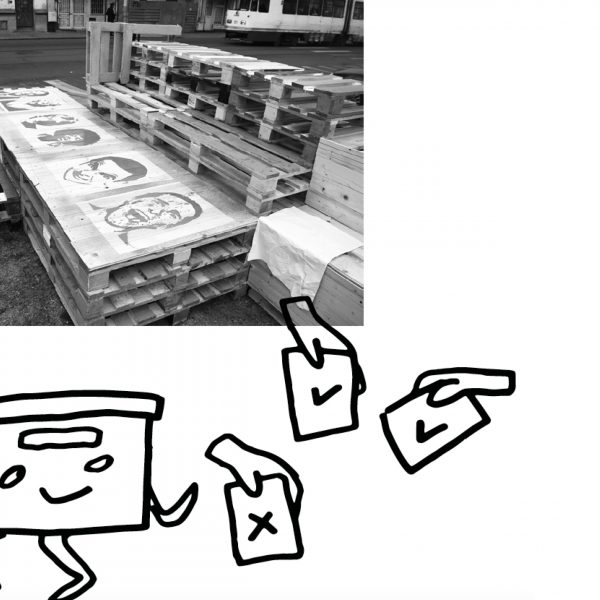 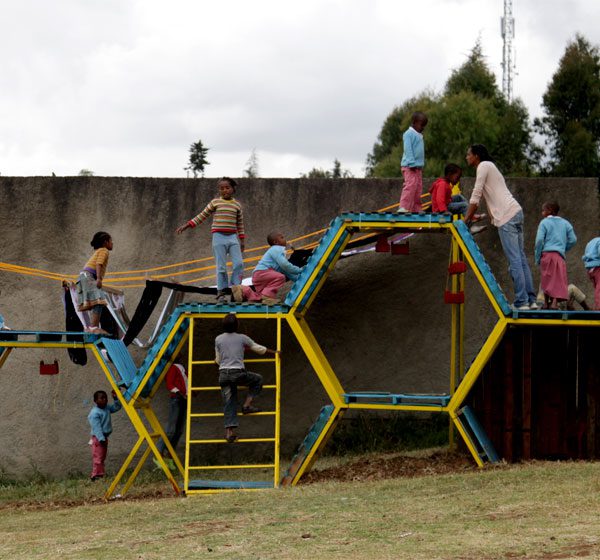 SELF-MADE PLAYGROUND: THE HOUSE OF THE LOST CHILDREN