THE METAMORPHOSIS OF SLOTERDIJK

It’s no coincidence that the conversation takes place at Bret, a bar/restaurant that does a lot with beer and is housed in red sea containers in front of Sloterdijk Station. ‘Bret’ refers both to the nearby nature area and a special kind of brewer’s yeast.

Bret is only one of the many improvements that have been made to the area around Sloterdijk Station, which until recently was considered dismal. A piece on the website upcoming.nl artfully and hilariously tore the station and its surroundings to shreds: ‘Even a burnt-out Fiat Panda looks more inviting than interior and exterior of Sloterdijk Station,’ it read.

‘If you had no business going there, you wouldn’t go at all,’ agrees Pien van der Ploeg, communication consultant in area development at the municipality of Amsterdam. When, on top of all that, the offices around the station started emptying out during the economic crisis – some new buildings never even had a tenant before being converted into hotels – the municipality decided to intervene. ‘We wanted to prevent the area from deteriorating,’ says Arwen Schram, project manager of the team tasked with area development at Sloterdijk. ‘Moreover, we didn’t think that single-purpose office areas were of this time anymore.’

A strategy paper was released, followed by a flexible zoning plan, which allowed for the construction of hotels and housing in the area. ‘The project team saw the potential of the area, but also realised that a great deal had to happen before others would recognise it too. So our reasoning was: instead of first allocating the plots and only then tackling the public space, we should do it the other way around,’ Van der Ploeg says. ‘Our strategy was based on the idea that you have to put cost before benefit. That was quite bold, because it happened during a time of major cutbacks.’ 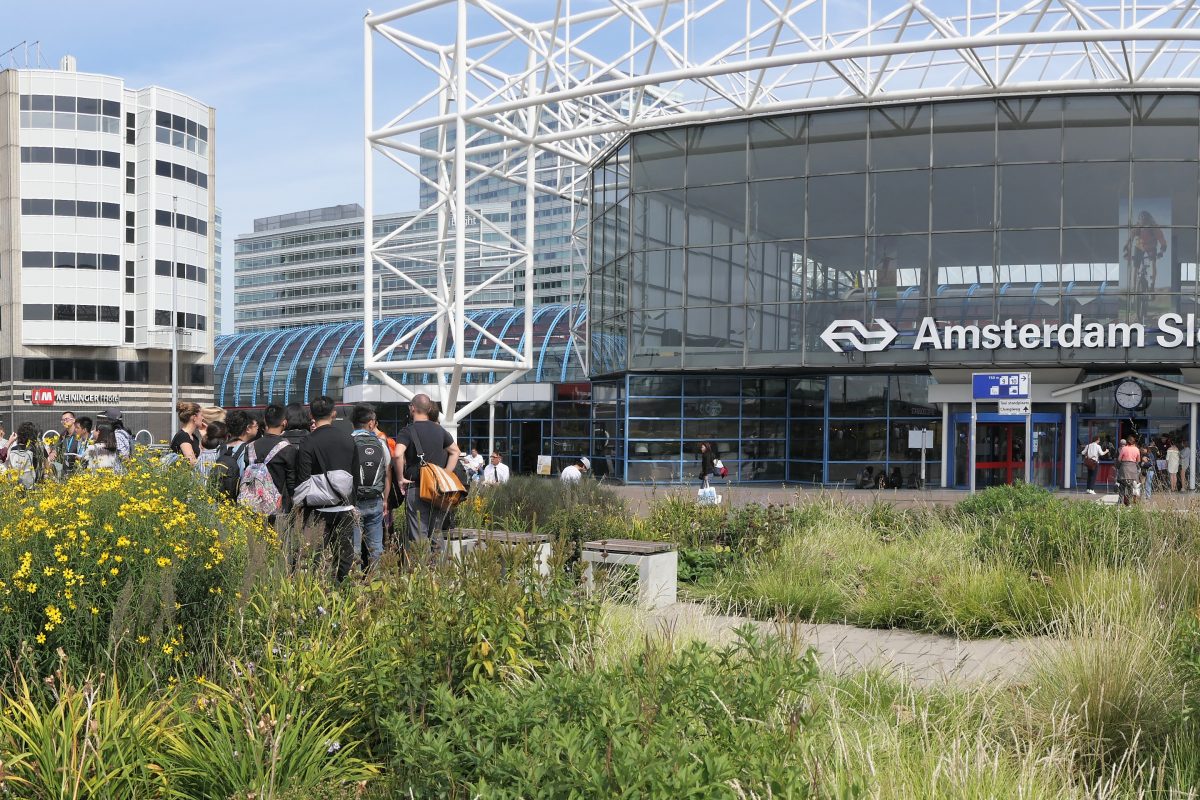 An estate agent for the area was called in and asked users what they needed. Van der Ploeg explains how it unfolded. ‘Do you want a safe pedestrian crossing? Okay, we’ll take care of it. A bench where staff can eat a sandwich at lunchtime? Deal. Those were quick wins. In addition, the team organised symposiums with companies about the future of the area. There was a lot of enthusiasm for that, except with the foreign property owners, because for them you’re nothing more than a column in a spreadsheet.’

After the strategy paper and the accompanying zoning plan were developed, the municipality was the first to start working on the station’s square, Orlyplein. This occurred in co-creation with the owners and users of the square. The abandoned bus station became an oasis of green, art and light. The way the footpaths came about was special. ‘In December,’ Van der Ploeg recalls, ‘the designers got together. It had just been snowing, so there were footprints all over the square. The designers used these footprints as a blueprint for the footpaths in between the green areas.’

Part of the strategy for the area was to make it a more attractive place to be. Placemaking was a key aspect of this. For example, there were festivals on unoccupied plots and even in empty offices. Temporary beach chairs and a life-size chess board appeared on Orlyplein. Van der Ploeg took steps of her own as well. She managed to install the largest Christmas tree in Amsterdam in 2015. With the help of the owner of the 95-metre-high Crystal Tower she stuck cardboard panels on the windows of this office building, creating a gigantic lit-up Christmas tree.

The temporary facilities were also essential to making this an attractive place to be. The bar/restaurant pavilion Bret is one example, as is the padel club (padel is a racket sport), which will be opening its doors in late 2017. In agreement with the municipality, Bret launched ‘De Tuin van Bret’, or Bret’s Garden, on an undeveloped piece of land opposite the bar/restaurant pavilion, which included a vineyard, among other things, surrounded by facilities. It too was constructed of red sea containers.

The transformation strategy had a positive effect in terms of arousing the interest of hotels owners in particular. They came to the area in droves in the period following the crisis. There are now nine hotels with about 2,000 beds in the immediate vicinity of Sloterdijk, one of which has the shape of old train carriages. As office space was transformed into hotels, the municipal transformation managers were always sure to give the surroundings important consideration. They were also involved in allocating uses for the plinths and determining the appearance of the façades. ‘Their discussions went something like this: if we build a more attractive street, will you fix up the façade?’ says Arwen Schram.

After the hotel owners came the developers. Many in fact. The first tender for a housing plot, which was released in September 2016, elicited as many as 21 responses from developers. There is space for about 1,500 apartments in the coming five years, a number which will increase to a maximum of 7,500. The municipality is using the tender not only to influence the nature of the construction, but also that of the environment. Indeed, the award criteria specify that the plinths must contain cultural facilities, cafés and restaurants, or recreational facilities, so that they contribute to a lively commercial and residential environment. Quality and sustainability carry the most weight in awarding the tender. Heijmans has won the battle for the first plot with a type of ‘urban green living’ that is striking for its abundant green space, even in the high-rise.

Although placemaking was a consideration during the processes of transformation, new housing construction and public space redevelopment, it still remains a focus in its own right. ‘When things were so difficult for this area, we welcomed much of what came our way,’ Schram says. ‘Now that we’ve moved forward, the team can be more selective.’ Temporary initiatives are no longer accepted. But a budget has been earmarked for placemaking in the long term. A community-building process is ongoing, in which the municipality is participating. The idea is to have the community eventually develop their own initiatives that dovetail with the final blueprint: a cool and appealing area to live and work. 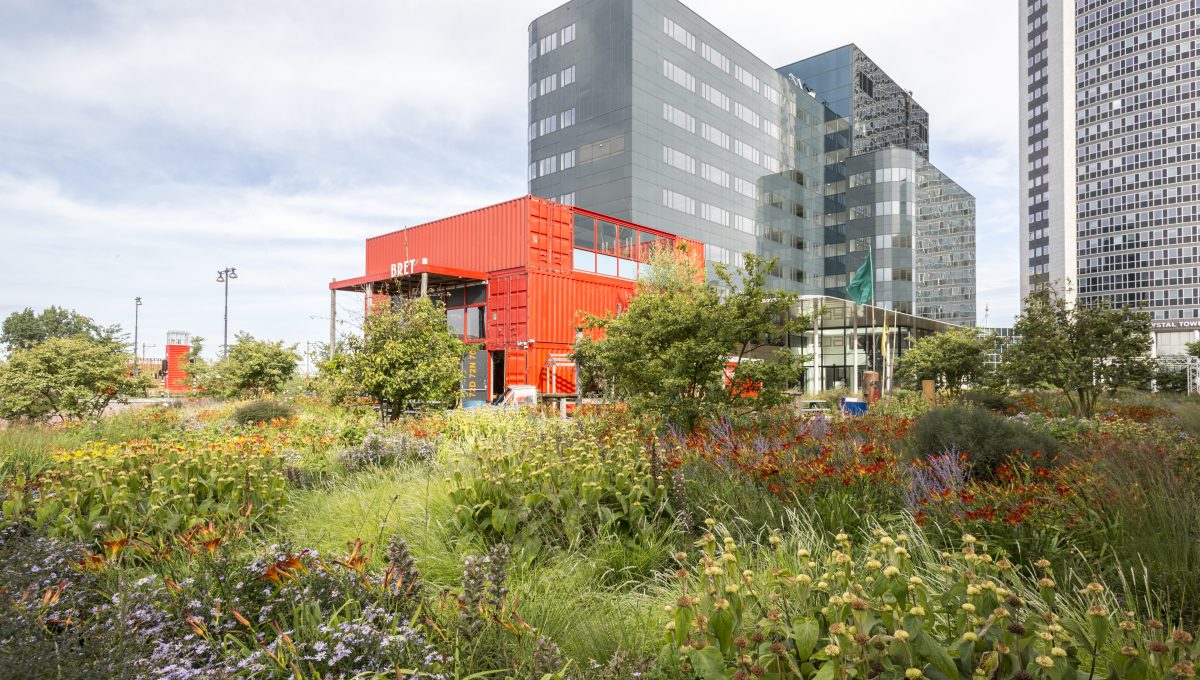 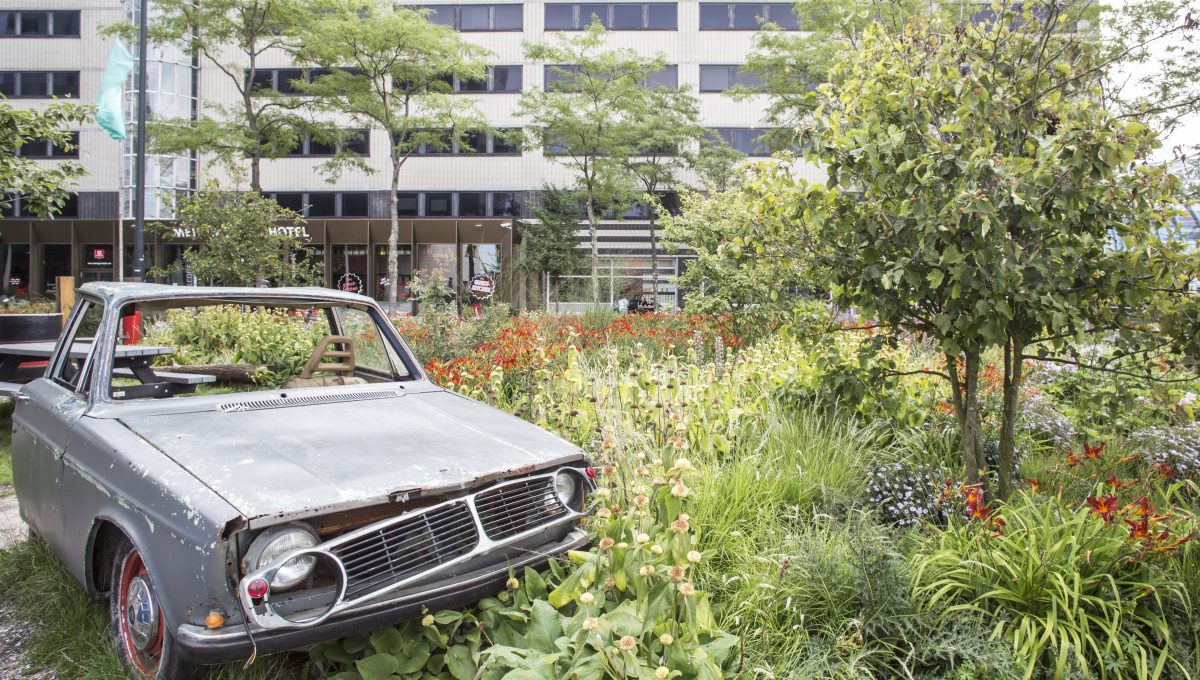 The significance of the developments at Sloterdijk has increased now that the municipality has launched another project called Haven-Stad, which will transform former port areas just to the north of Sloterdijk and generate 40,000 to 70,000 apartments and 45,000 to 58,000 jobs. In the meantime, in addition to the housing construction and the related facilities at Sloterdijk, there are other improvements that could be made. For example, the connection to neighbouring districts could be better, and the station itself could use an overhaul. ‘But tourists already see this as a typical Amsterdam area, with all its bicycles parked outside,’ Van der Ploeg says. ‘In fact, they don’t see Orlyplein as square but as a station park. As far as I’m concerned, though, this can only be called a success if the city’s inhabitants embrace Sloterdijk as a genuine piece of Amsterdam.’

Sloterdijk has existed as a village since the fourteenth century. At the time, it was surrounded by farms. From 1890 onwards, it had its own station on the first railway system in the Netherlands, which linked Amsterdam to Haarlem. In the 1980s, when Sloterdijk became part of Amsterdam, a new, high-tech station was built. Three railway lines converged there: the one to Haarlem, the one to Den Helder and the one to Schiphol Airport. The metro stopped there as well. At the end of the last century, it became home to a business park called Amsterdam Teleport. As a result of rapid developments in ICTs (internet) and the real estate crisis, this particular function never really got off the ground. Currently, the station area consists mainly of offices. The municipality has announced its intention of improving the area’s quality of life and increasing its diversity. 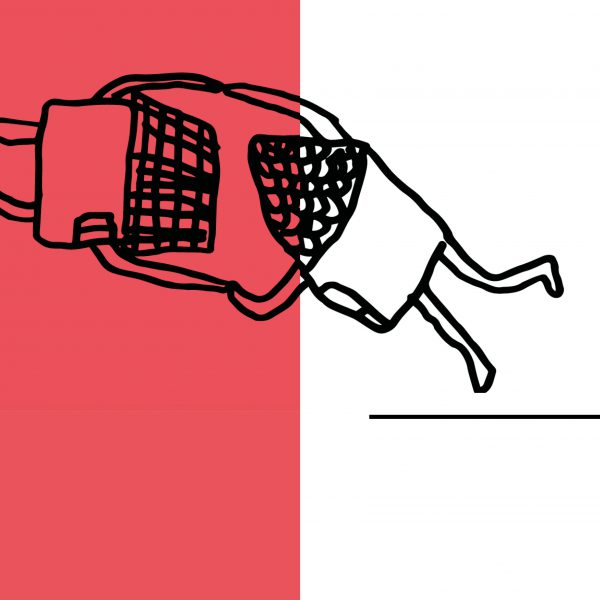 Doing Together: From Temporary Use of Public Spaces towards a Co-created City 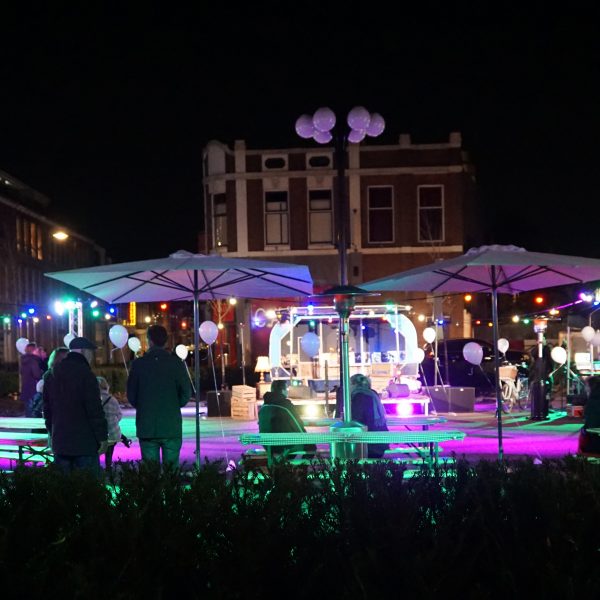 LEARNING TO TRUST RESIDENTS AS A DRIVING FORCE